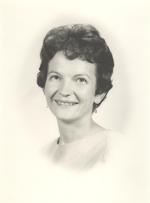 Adrienne Adamson, of Aberdeen, Idaho died February 28, 2012 at Spring Creek, in American Falls, Idaho.  She was born in Blackfoot, Idaho to Emma and Myron Dance January 7, 1934.  She went to first grade in Fairview, Idaho. Then the family moved and she attended schools in Groveland, Idaho, then in Aberdeen where she graduated from Aberdeen High School.  Later she attended John F. Kennedy College in San Antonio, and San Antonio Junior College.

Adrienne married Leon Adamson on June 23, 1951. Together they moving several times with his military career traveling and visiting 34 countries, and raising their boys and a few that stepped in for a visit along the way.  When Leon retired from the Air Force the family returned to Idaho in 1972 and Adrienne spent 22 years employed at the Simplot Potato Food Group in Aberdeen.  She made many lifelong friends while working at Simplot.

To order memorial trees or send flowers to the family in memory of Adrienne Adamson, please visit our flower store.