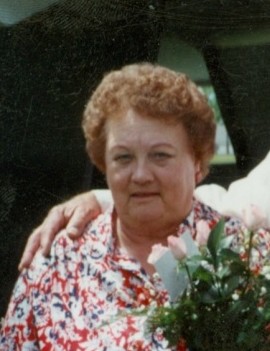 Alene Afton Heaton Benson, passed away in American Falls, Idaho on September 19, 2019 of causes incident to age.  She was 97 years old.

Alene was born to Frank Afton Heaton and Nettie Fern Dutson on April 9, 1922 in Ririe, Idaho.  She was the oldest of 5 children. As a young child, Alene’s father worked for Grain Growers which caused the family to move frequently.  During her childhood years she lived throughout southeastern Idaho including Ririe, Downey, Malad, Pocatello, and American Falls. The family also spent time in Garland, Utah.

Alene attended American Falls High School, graduating in 1942.  It was during her sophomore year that she met Donald Samuel Benson.  Alene and Don were married on November 7, 1942 in Pocatello, Idaho and were lifelong companions.  Two months after being married, Don left to serve in the Pacific Theater of World War II. They were apart for two years.  During this time Alene continued helping take care of her younger siblings as well as working at the drug store and bowling alley in American Falls.

In 1945 after her husband returned, the family moved to Roy, Idaho to join Don’s father in farming.  Don and Alene created a successful farm and ranch operation throughout Power County and raised four children.  Don and Alene were residents of Roy, Rockland, Fall Creek and American Falls.

Alene loved to travel, fish, cook and spend time with family and friends.  She was a 4-H instructor for many years, sharing her talents of baking and cooking. She was president of the PTA in Rockland for numerous years.

A graveside service was held on Saturday, September 21, 2019 at the Falls View Cemetery in American Falls, Idaho.

To order memorial trees or send flowers to the family in memory of Alene Afton Benson, please visit our flower store.
Send a Sympathy Card