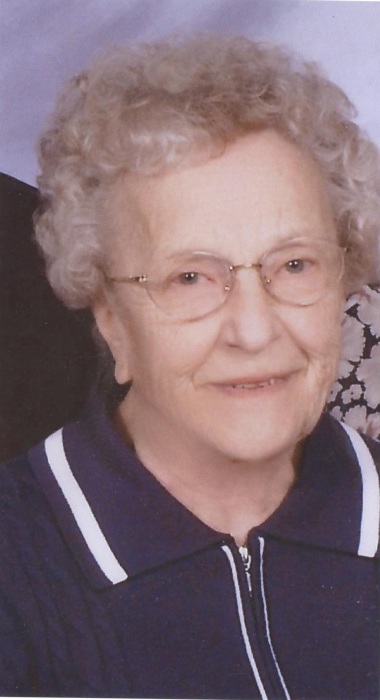 Alice Lena Detzel Kress passed away on October 10, 2018 at the age of 99. She was born at the family homestead near Roy, Idaho to Martin Detzel and Lena Kebell Detzel.

She attended grade school at East Lonigan School. She and her brother Lewis walked a couple of miles to school or rode their horse. She completed high school in Dalles, Oregon and American Falls, Idaho.

On December 12, 1937 Alice married Roscoe Kress at St. John’s Lutheran Church in American Falls. Alice and Roscoe met at the dance hall in Roy. They raised two sons, Jerry and Don. They raised wheat and cattle at their farm south of Rockland, Idaho. Their grandchildren loved to visit the farm; it was like going to summer camp, at any time of year.

Alice was a life-long member of St. John’s Lutheran Church.

Her greatest joy in life was her family and she never forgot a family member’s birthday. She enjoyed many friends over the years. She and Roscoe liked to visit friends and play pinochle. She enjoyed playing in a bridge club for many years.

Alice grew a large garden and had fruit trees and chickens and would often keep a cat or two who showed up at the farm. She enjoyed growing and harvesting the fresh and healthy vegetable until she was in her 80s.

To order memorial trees or send flowers to the family in memory of Alice Lena Kress, please visit our flower store.
Send a Sympathy Card