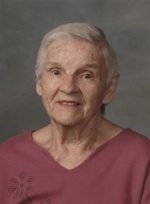 Alta Anna (Permann) Hall passed away at the age of 91 on Wednesday, June 6, 2012, at Spring Creek Manor in American Falls.  She was born January 11, 1921 in Rockland Valley at the Permann homestead the youngest of 11 children born to Fredrick and Gottlieba Permann.  She is a lifelong resident of American Falls, Idaho graduating in 1939 from American Falls High School.  Alta married James Martin Hall on January 26, 1946.  They purchased a lot and moved a home on to it at 153 Howard Street and lived there for their entire married life.  They had three children.

Alta had several places of employment; Peterson’s Market, Union Pacific Railroad, and the position she retired from as Grower's Accountant for Lamb Weston in American Falls.  She worked there for 24 years.  Alta enjoyed her family, extended family, gardening, cooking, crocheting and loved to travel.  Alta and James did just that for the next 18 years until James passed away April 7, 2003.  Alta remained at their home until February 22, 2008 and then moved to Spring Creek until her passing.

Her funeral will be at American Falls Community Church at 745 Bennett in American Falls, ID on Monday June 11, 2012; at 10 A.M., a luncheon will follow at the church.  Interment will be in Falls View Cemetery.  The Viewing will be Sunday, June 10, 2012 from 5-7:00 p.m. at Davis-Rose Mortuary, 170 Idaho St. American Falls, and Monday for an hour before the funeral at the church.

To order memorial trees or send flowers to the family in memory of Alta Anna Hall, please visit our flower store.
Send a Sympathy Card