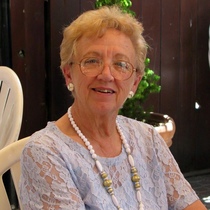 Arlys D. (Kosanke) Mayer, 82, passed away from causes related to age on November 1, 2014, in American Falls, Idaho.  Arlys was born on July 21, 1932 in Wishek, North Dakota, to parents Albert and Hulda (Fercho) Kosanke.  She was raised in the area surrounding Wishek, primarily on the John Leischner farm.  Arlys graduated from Wishek High School in 1950, and attended the Ellendale State Normal and Industrial School for two summer teacher training programs.  She taught in 1-room schools (grades 1-8) in the Arvada and Hollingsworth districts.  She then worked briefly at the Bismark Hospital before attending Cascade College in Portland, Oregon.  She graduated from Cascade in 1957 with a Bachelor of Arts in Religion.  In 1959 she saw an advertisement seeking teachers, placed by Superintendent Wesley Frazier of the American Falls School District.  She was familiar with American Falls due to having relatives of her father's, Dave and Lydia Kosanke, already living there.  Arlys accepted a 5th grade teaching position in the fall of 1959, and her sister Bee, having also just graduated Cascade College, was hired as the elementary music teacher.

Arlys met Vernon Mayer in February of 1960 through mutual friends, and they were married on August 21 1960 in Bismark, North Dakota.  They celebrated their golden wedding anniversary in 2011.

Arlys taught at Hillcrest Elementary for a total of 3 years and was a substitute teacher for years afterwards.  She was involved in many community activities and organizations, most notably the Pink Ladies Hospital Auxiliary from its inception in 1963.  She also enjoyed singing with the AF Sharps Choir.  Her love of teaching and children combined inherently leading various Sunday School and Vacation Bible School classes, as well as adult bible studies throughout her life.  Her skill at hand crafts and cooking led her to enter numerous projects in the Open Class of the Power County Fair.

A viewing will be held at Davis-Rose Mortuary in American Falls from 6:00-8:00 pm on Thursday, November 6.  A family viewing on Friday morning will precede a graveside service at 10:00 am at Falls View Cemetery, with a memorial service to follow at American Falls Community Church at 11:00 am (luncheon afterwards).  In lieu of flowers, the family requests that people consider a donation to the Power County Pink Lady Auxiliary Scholarship Fund via Harms Memorial Hospital District, 510 Roosevelt Street, American Falls, Idaho, or to a charity of their choice. Condolences and memories may be shared at www.davisrosemortuary.com.

To order memorial trees or send flowers to the family in memory of Arlys D. Mayer, please visit our flower store.