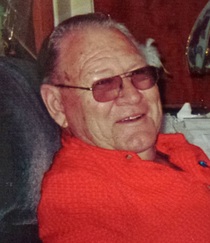 Arthur (Art) L. Mayer went to join his heavenly father on July 3, 2014.  Art was born on March 23, 1936 to Henry and Bertha Mayer in American Falls, Idaho.  He was the youngest of ten children.
Art married Rose Parsons on March 19, 1960.  They lived in Pleasant Valley with their family until 1963.  They moved to American Falls, where he tended bar and worked for the American Falls School District.  When Art was young he was a member of the Boot and Saddle Club in Aberdeen.  He farmed with his father and then on his own.  He worked various places over the years.  Art started to work for the Aberdeen School District in 1989 as a janitor and a school bus driver until his full retirement in 2008.
Art loved to fabricate stories and jokes, which he told all of the children and grandchildren.  When he was telling you one, you could not tell if it what the truth or not.  He enjoyed spending time with his grandchildren and great grandchildren.  All of his children, grandchildren and great grandchildren had a nickname that was given to them by him.  His greatest achievement was his family.
Art was preceded in death by his parents, Henry and Bertha Mayer, four brothers, Ted Schimdt, Theophil Schidmt, Otto Mayer, Alfred Mayer and two sisters, Theresa Nieman, Helena Neu.
Art is survived by his wife of 54 years, Rose Mayer, his children Randy (Judy) Mayer, Gary Lee, Karen (John) Slaugh, Annette (David) Campau, Price (Juli) Mayer, Joy Mayer, Farron (Nicole) Mayer, Daryl (Amy) Mayer, DJ (Kevin) Yarger and two brothers, Robert Mayer, Emil Mayer and one sister Viola Gambill.   He also is survived by eighteen grandchildren and ten great grandchildren.
There will be a graveside service at Noon Tuesday, July 8, 2014 at the Aberdeen Cemetery.  The family would like to thank all of the friends and family for the support during this difficult time.  Condolences and memories may be shared at davisrosemortuary.com.

To order memorial trees or send flowers to the family in memory of Arthur Mayer, please visit our flower store.
Send a Sympathy Card