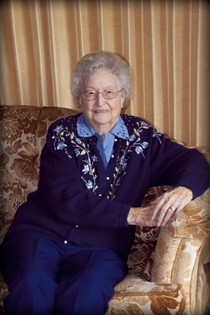 B. Barbara Blenz Ringe, 100, passed away October 29, 2016 at Portneuf Medical Center in Pocatello surrounded by her family, 2 days before her 101 birthday.
Barbara was born November 1, 1915 in Wilbur, Washington to Adam Blenz and MaryAnn Hudson.  She was the 4th of 5 girls in the family.  Barbara moved to Idaho in 1927 where the family settled on a farm in Roy, Idaho.  While on the farm Barbara enjoyed the workhorses and could often be found working with her Mom in the garden or in the fields with her Dad.
She married Carl Ringe on December 1, 1937 in American Falls; they were married almost 60 years before his death in 1997.  She was a member of St. Johnâ€™s Lutheran Church.
They settled on the Blenz family farm on the Roy divide where they farmed until their retirement in 1978.  After retirement they moved into American Falls full time and continued their work at Ringeâ€™s Evergreen Ceramics, which they started in 1972. Barbara and Carl were active in the Eastern Idaho Ceramic Association for 18 years where they traveled extensively throughout the western United States and Canada.   Barbara was a talented seamstress who excelled in making beautiful clothes for her 4 daughters and numerous quilts for all generations of her family.  Crocheting was another talent Barbara had; she made wonderful afghans for her friends and family.
The greatest joys in Barbaraâ€™s life were the time she spent with her family.  She was often entertaining, whether it be friends or family, or a group of her grandkids friends who always knew you could go to Grandma Ringes.   One of her special talents was making everyone, whether it be friend, grandchild or great grandchild, to feel like they were her favorite.  She was steadfast in her beliefs and passed her dedication and perseverance onto 4 generations of family.  Barbara loved traditions, old and new, from the familyâ€™s beloved Maple Walnut Cake, to the great joy of Chicken and Noodles, potato salad, and homemade coffee cake.  Her generous heart was well known throughout the community, along with her love of sweets.
Barbara is survived by her 4 daughters, Carlene Besner of Winnipeg Manitoba, Lynn Fogerson of Pocatello, Idaho, Robyn (Paul) Herndon of American Falls, and Rita (Ron) Funk of American Falls, Idaho; 9 grandchildren, 14 great grandchildren and 1 great great grandchild with another on the way; and one sister Claire Clark of Minden Nevada, along with numerous nieces and nephews.
She was preceded in death by her husband Carl Ringe, sisters Verna Blenz, Faye and Earl Charles, and Margaret and Melvin Nelson, brother-in-law David Clark and son-in-law James Fogerson.
Funeral services will be Friday, November 4, 2016 at 11:00am St. Johnâ€™s Lutheran Church with a burial to follow at Fallsview Cemetery. The viewing will be held Thursday November 3, 2016 from 6-8 p.m. in the fireside room of the church and Friday for one hour prior to services.   The family would like to extend thanks to the Ladies at Spring Creek who helped care for her over the last 22 months.
The family asks that memorials be made to St. Johnâ€™s Lutheran Church in American Falls. Condolences and memories may be shared at www.davisrosemortuary.com.

To order memorial trees or send flowers to the family in memory of Barbara Ringe, please visit our flower store.
Send a Sympathy Card