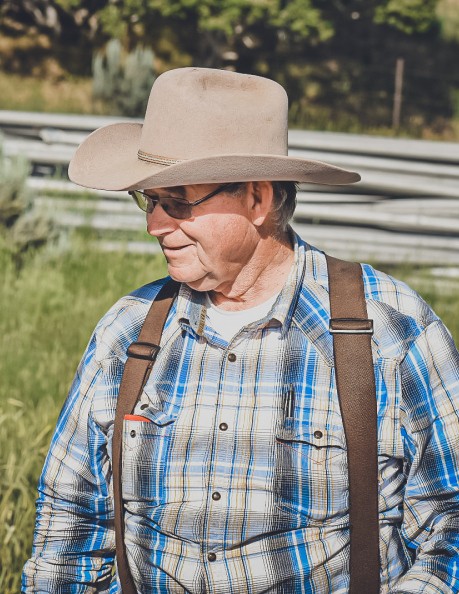 Barry was raised in Arbon Valley on the family farm and ranch during World War II. He graduated from American Falls High School in 1961 where he competed in basketball and rodeo. He was instrumental in organizing the first rodeo club at American Falls High School, and competed in calf roping and cow cutting, tying for second at the Nationals Finals in the cow cutting. After graduation he attended Utah State University where he was a very active member of the rodeo team, again helping to organize the first rodeo club. He also served as a director of the Rocky Mountain Region for the NIRA, and added bull riding to his events. After graduating from USU with a bachelor’s degree in Range Management, he joined the Army Reserves and completed his basic training in Fort Ord, CA.  Later he also completed a Vet School program for ranchers. This enabled him to do almost all his own vet work over the years and perform many complex operations such as C-sections. He also performed many operations for his neighbors in the valley.

In 1969 he married his lifelong sweetheart Valorie Eames of American Falls, later they were sealed together in the Logan, UT Temple.  They built their life on the family ranch in Arbon. Barry and Valorie continued to travel to rodeos together where Barry enjoyed team roping and calf roping, and worked to expand the ranch. Along with Sod and Nelda they brought in some of the first purebred Simmental cattle to southern Idaho. That began Barry and Valorie’s foundation for Arbon Valley Simmental and the many bull sales to come. Barry was active raising, showing and promoting purebred Simmental cattle; bull sales; activities with 4-H; Power County Fat Stock Sale; and in various beef industry associations. He stayed active in range, water and current issues affecting ranchers up until the time of his death.

The cattle were Barry’s passion, but his true love was his six children: Travis, Justin, Jody, Jason, Tina, and Trevor. Despite the demands of the ranch, he always made time for his family, teaching his kids the value of hard work and making sure they had time to compete in wrestling, basketball, and rodeo. In his later years, Barry and Valorie spent their time chasing their grandchildren’s many events, in between Barry chasing his cows and water. Barry loved what he did and continued to work right up until just a few weeks ago. He was still roping at brandings this spring and changing his irrigation water daily. He was a hard worker all of his life.

The funeral services will be held on Wednesday October 13, 2021, at 11:00 am at the Church of Jesus Christ of Latter Day Saints on 650 Pocatello Avenue in American Falls. The visitation will be on Tuesday, October 12 from 6 pm to 8 pm at Davis-Rose Mortuary and 10 am on Wednesday, October 13th at the church.  Interment will be in Falls View Cemetery in American Falls followed by a luncheon back at the church. Condolences and memories may be shared at www.davisrosemortuary.com

In lieu of flowers, memorials can be made to the Barry Williams Memorial Wrestling Scholarship fund at the Bank of Commerce 590 Tyhee Ave, American Falls, ID 83211 or the Portneuf Rodeo Committee LLC Memorial Scholarship fund in Memory of Barry Williams. Please mail donations to the Portneuf Rodeo Committee at 12323 West Reservation Road. Pocatello, Idaho 83202. Scholarship will be awarded at the 2022 Idaho High School Rodeo Association State Finals Rodeo.

Click to download / open
To order memorial trees or send flowers to the family in memory of Barry Williams, please visit our flower store.
Send a Sympathy Card