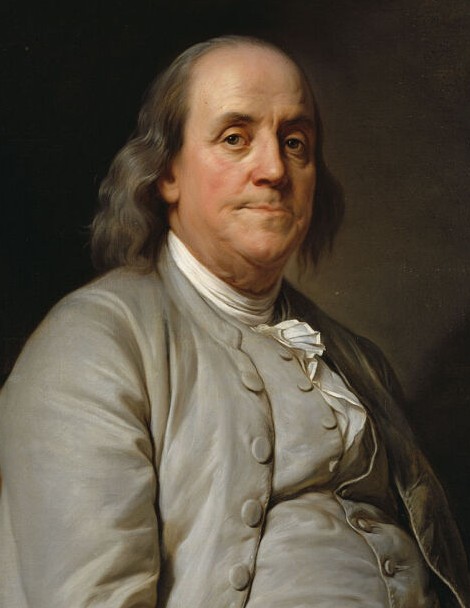 Born in Boston in 1706, Franklin became at 12 years old an apprentice to his half brother James, a printer and publisher. He learned the printing trade and in 1723 went to Philadelphia to work after a dispute with his brother. After a sojourn in London, he started a printing and publishing press with a friend in 1728. In 1729, the company won a contract to publish Pennsylvania’s paper currency and also began publishing the Pennsylvania Gazette, which was regarded as one of the better colonial newspapers. From 1732 to 1757, he wrote and published Poor Richard’s Almanack, an instructive and humorous periodical in which Franklin coined such practical American proverbs as “Early to bed and early to rise, makes a man healthy, wealthy, and wise.”

As his own wealth and prestige grew, Franklin took on greater civic responsibilities in Philadelphia and helped establish the city’s first circulating library, police force, volunteer fire company, and an academy that became the University of Pennsylvania. From 1737 to 1753, he was postmaster of Philadelphia and during this time also served as a clerk of the Pennsylvania legislature. In 1753, he became deputy postmaster general, in charge of mail in all the northern colonies.

Deeply interested in science and technology, he invented the Franklin stove, which is still manufactured today, and bifocal eyeglasses, among other practical inventions. In 1748, he turned his printing business over to his partner so he would have more time for his experiments. The phenomenon of electricity fascinated him, and in a dramatic experiment he flew a kite in a thunderstorm to prove that lightning is an electrical discharge. He later invented the lightning rod. Many terms used in discussing electricity, including positive, negative, battery, and conductor, were coined by Franklin in his scientific papers. He was the first American scientist to be highly regarded in European scientific circles.

Franklin was active in colonial affairs and in 1754 proposed the union of the colonies, which was rejected by Britain. In 1757, he went to London to argue for the right to tax the massive estates of the Penn family in Pennsylvania, and in 1764 went again to ask for a new charter for Pennsylvania. He was in England when Parliament passed the Stamp Act, a taxation measure to raise revenues for a standing British army in America. His initial failure to actively oppose the controversial act drew wide criticism in the colonies, but he soon redeemed himself by stoutly defending American rights before the House of Commons. With tensions between the American colonies and Britain rising, he stayed on in London and served as agent for several colonies.

In 1775, he returned to America as the American Revolution approached and was a delegate at the Continental Congress. In 1776, he helped draft the Declaration of Independence and in July signed the final document. Ironically, Franklin’s illegitimate son, William Franklin, whom Franklin and his wife had raised, had at the same time emerged as a leader of the Loyalists. In 1776, Congress sent Benjamin Franklin, one of the embattled United States’ most prominent statesmen, to France as a diplomat. Warmly embraced, he succeeded in 1778 in securing two treaties that provided the Americans with significant military and economic aid. In 1781, with French help, the British were defeated. With John Jay and John Adams, Franklin then negotiated the Treaty of Paris with Britain, which was signed in 1783.

In 1785, Franklin returned to the United States. In his last great public service, he was a delegate to the Constitutional Convention of 1787 and worked hard for the document’s ratification. After his death in 1790, Philadelphia gave him the largest funeral the city had ever seen.

To order memorial trees or send flowers to the family in memory of Benjamin Franklin, please visit our flower store.
Send a Sympathy Card