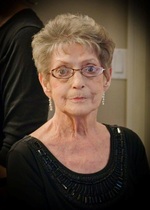 On Tuesday, February 7th at 2:15am Betty Ann Brumfield-Friesen passed away peacefully at Portneuf Medical Center, surrounded by people who loved her.  Betty was born in Taney County Missouri on July 5th 1933, to John William Brumfield (Missouri) and Bertie May Stacey Brumfield (Missouri).  She was the sixth of eight children.  In 1937 the family relocated to American Falls Idaho where the kids attended Fairview School until it merged with American Falls school, which Betty attended for the remainder of her High School Education.  Her younger years were spent with her siblings tending the farm and getting into mischief.  In her free time she played baseball games with her family and listened to her brothers play music and sing.  Betty was known for her wonderful sense of fashion and her ability to always attract attention with her sense of humor and captivating personality. After High School Betty moved to California and attended school for Dental Hygiene, it was there that she met Francis Ernest White Jr.  Frank and Betty were married and had two daughters, Pamela Ann and Leslie Anne.  Frank and Betty later divorced and Betty and the girls remained in California where Betty worked at General Dynamics as a Secretary.  She later met Alfred Frederick Oertle, they were married, and in 1965 Angela Ann was born.  In the summer of 1969 Fred, Betty and the three girls moved back to American Falls Idaho.  During that time Betty worked as a Secretary for Simplot Soil Builders in Blackfoot Idaho.  Fred and Betty were later divorced and at that time Betty became a waitress at Roger’s Cafe in American Falls, happily raising her three daughters.  In 1977 Betty began working for Simplot Food Group in Aberdeen Idaho.  She started entry level in the Sanitation Department and quickly moved herself up to a Quality Assurance Lead.  For the next decade she worked at Simplot and enjoyed her children, family, and friends.  While working at Simplot Betty was reconnected with Leo P. Friesen, a boy she had attended school with when she was young.  Betty retired, married Leo and they headed off to California for a short time, before relocating to Yakima Washington.  They loved Yakima, but a few years later decided to move back to American Falls to be near family and close friends.  They bought a beautiful home and Betty spent her time there growing spectacular roses, relaxing, and enjoying life with her children and grandchildren.  Halloween was Betty’s favorite holiday and in her years with Leo they made it their tradition to do it better each year. It was a time where the whole family was brought together in whimsical laughter and light hearted fun, which made Betty and Leo both extremely happy. In 1998 Leo passed away.  Betty remained in American Falls where she participated in the Red Hat Society, worked for the Senior Citizen Center leading exercises, delivering Meals on Wheels and managing rentals.  She spent some time as the Activities Director for Spring Creek Manor and substituted as a lunch lady for the American Falls School system. She was always contributing her fun-loving personality to anyone and everyone possible. In 2009 Betty headed to Lynnwood Washington to spend a year with her youngest daughter and her two grandkids.  In that time Betty made many great friends and fell in love with the beautiful city.  In 2010 she returned to Idaho and set herself up in an apartment that she adored.  In her last years she spent the majority of her time with family or reading, her favorite were mystery novels.  Betty was loved dearly by everyone she met and was a favorite amongst kids and grandkids.  She had an amazing ability to make a person laugh and a heart that could touch anyone. She was a firecracker of a lady and will be missed by all who knew her.  Betty is survived by her three daughters Pamela Ann White Bailey (Wade), Leslie Anne White Adamson (Randy), Angela Ann Wright Geppert (Michael), Grandsons Jason Bailey (Kathy), Ean Fisher and Dillon Wright, Granddaughters Natalie Bailey Howard (Kendon), Mallarie Fisher Bascom (Joel), Dalanie Fisher and Chloe Wright, eleven great-grandchildren, her sisters Ethel Brumfield Alston (Edwin) and Marguerite Brumfield Armstrong (Jim), and a brother Dale Brumfield,.  She is preceded in death by her husband Leo P. Friesen, a granddaughter Kelsie Anne-Marie Fisher (Leslie), and brothers Vernon Brumfield, Bob Brumfield, George Brumfield and Alfred Brumfield.  Services for Betty will be held Saturday, February 11th, beginning with a public viewing at 9:30am at St. John’s Lutheran Church in American Falls, The funeral service will be at 11:00am, graveside services immediately after, followed by a meal at St. John’s for friends and family.  Flowers can be sent to Davis-Rose Mortuary, donations can be made to the Power County Senior Citizen Center in Betty’s name.

To order memorial trees or send flowers to the family in memory of Betty Ann Friesen, please visit our flower store.