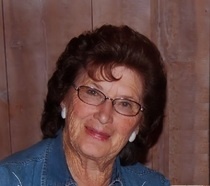 AMERICAN FALLS - Betty Jean Nelson, 85, passed away peacefully at home on the evening of February 24, 2014 surrounded by her loving family.

Betty was born on November 17, 1928 on the family farm in Weston, ID to Arthur Earl and Myrtle (Mickelson) Wentworth.  She grew up on the farm with her two younger brothers, grandparents, aunts and uncles without many modern conveniences.

When she was 17 years old, she married the love of her life Alma "Beechnut" Nelson on November 26, 1946 in San Francisco, CA where Beechnut was stationed in the Navy. She returned home to finish high school, when Beechnut was discharged in 1947. They made their home in Clifton, ID where their first of 4 children Kathy was born.  In 1949 they moved to Pocatello, ID and had their first son Mike.  Five years later in December of 1954 they moved to American Falls where their daughter LeAnn and son Bob were born and raised.

She was a waitress at Roger's Cafe for 22 years, then went to work for the Sagebrush Bar where she worked for another 29 years until she retired two months before her 82nd birthday.  She loved working with the public and was loved and admired by everyone she ever met. Betty was a member of the Ladies VFW Auxiliary for several years where she held several positions.  Betty was always a very outgoing person and never met a stranger.

She loved the outdoors, she was an avid hunter, fisherman, and always kept up with the guys on many snowmobile outings.  She was instrumental in planning all the hunting and fishing trips with the family and friends that was usually located in Island Park, ID.  Spending time with family and friends really meant a lot to her over the years.

Condolences and Memories may be shared at davisrosemortuary.com

To order memorial trees or send flowers to the family in memory of Betty Jean Nelson, please visit our flower store.