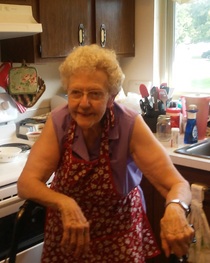 Bonnie Sue Booth, 83, went to be with her Heavenly Father Thursday, March 2, 2017.
Bonnie was born to Rex and Helen Nichols on Dec. 25, 1933 in Aberdeen, ID, where she grew up and attended school. She was the third of five children.
She married Earl Mayer on June 23, 1953. Together they had four children: Richard, Rob, Joy and Tommy. Bonnie loved to bake and take care of her family. They divorced in 1972.
Bonnie met Wayne Booth and they were married on April 26, 1974 and spent many wonderful years together serving the Lord until his passing in 1989.
Bonnie loved to cook and serve others. She worked at Rogers CafÃ©, Melody Lanes and Willow Bay, where she served her famous pies, cinnamon rolls and candies. She treated everyone like family and was loved by the community.
She will be greatly missed.
She is preceded in death by her parents; her brothers, Robert and Earl; and her sister, Barbara. Survivors include her children; five grandchildren, Tracy, Michelle, April, Lance and Hilary; and ten great-grandchildren.
Services will be held Wednesday, March 8, at 3 p.m. at Christian Fellowship, 329 Harrison Ave. in American Falls, ID, with a lunch following.
To order memorial trees or send flowers to the family in memory of Bonnie Booth, please visit our flower store.