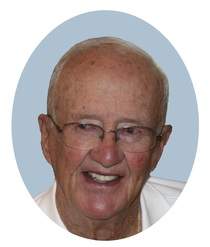 Born August 8, 1920 in Nephi, Utah to Joseph Fritchof and Lois Carver Nelson. Married Orena Johnson August 17, 1942 in Ely, Nevada; solemnized August 14, 1969 in Salt Lake LDS Temple. She passed away on September 21, 1999. He married Maureen England on February 8, 2002 in Green Valley, AZ. Lived in Nephi and Delta, UT; Twin Falls and American Falls, ID. Later in life he split his time between American Falls, ID and Green Valley, AZ. He served in the US Navy during World War II.

Boyd’s lifelong work was in the lumber business, beginning in high school. He worked for Tri-State Lumber and Boise Cascade before owning Boyd’s Building Supply in American Falls, ID for many years. He was active in the community through business and civic service. He was elected to the American Falls City Council and later served on the Board of his condo association in Green Valley, AZ. Lifelong member of the LDS church, he served many years as ward clerk. Boyd was a pilot and loved travel, golf, fishing, boating, reading, and crosswords. Most of all he loved sharing those activities with his children, grandchildren and great-grandchildren.

To order memorial trees or send flowers to the family in memory of Boyd Nelson, please visit our flower store.