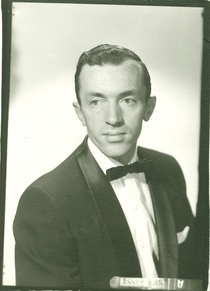 Bud Kelly, 92, peacefully passed away on Friday, February 10, 2017, at the Idaho State Veteranâ€™s Home.  Bud was born on October 11, 1924, to Robert and Phoebe Kelly in Rockland, Idaho.  Bud lived his early life in Rockland, Idaho.
The family moved to American Falls after the sale of the homestead in Rockland.  Upon graduation from American Falls High School, Bud received a diploma in one hand and his draft papers in the other, serving in the 17th Airborne during World War II and parachuting into Northern France and serving in the Battle of the Bulge, Bud was captured as a POW, later receiving a Purple Heart and a Bronze Star.
Bud started his career at Davis Mortuary and served as the Power County Corner for 40 years.  At the time of his retirement, he was the longest serving, elected official in the State of Idaho.  Bud spent the next 12 years as a foster grandparent aiding his daughter, Vicki, at American Falls Elementary School.  Bud married his wife Mary Genevieve Rasmussen on July 5, 1945.  They were blessed with two children, a daughter, Vicki Mayer (Carl), a son, Michael Kelly (Susan), six grandchildren, Carl James, Mark, Matthew Mayer, Kraig, Brock, and Kimbra Kelly, and seven great-grandchildren.
Bud was a dedicated member of the LDS Church, participating in the baptisms of new members.  Bud was proud to live independently until the age of 91, at which time he relocated to the Idaho Veteranâ€™s Home.  Bud was always a talented athlete and as of late an enthusiastic Raiders fan.
Bud was preceded in death by his beloved wife, Gen, his parents, 8 brothers and 1 sister.  Bud loved his family, friends and his community.  Bud consistently represented honor, integrity, loyalty and a strong display of service and fairness with everyone he met.
There will be a viewing from 5:30-7:30 PM Tuesday, February 14, at Davis-Rose Mortuary and from 10-10:45 AM Wednesday, February 15, 2017 at the American Falls LDS Stake Center.   A service will follow at 11:00 AM.

To order memorial trees or send flowers to the family in memory of Bud Kelly, please visit our flower store.