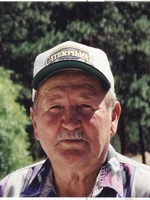 On November 13, 1949, he married Elfrieda Gehring in Salt Lake City, Utah.  They had four children, Greg, Chris, Mike and Heidi and continued the family farming and ranching operation.  Elfrieda and Carl later divorced.

Carl married Kathleen Anderson on July 10, 1980. Carl and Kathleen continued to run cattle until 1991 and farm in the Coldwater area until the time of his passing.

He was a member of The Church of Jesus Christ of Latter-day Saints. He enjoyed farming, ranching, fishing trips and spending time with his family and friends.  He was predeceased by his parents, one brother (Bill Barkdull), one sister (Vanese Ralphs) and one daughter, (Heidi Barkdull).
Survivors include his wife: Kathleen Barkdull of American Falls, Idaho; Son: Greg (Kathy) Barkdull of American Falls, Idaho; Daughter: Chris (Marc) Wiemar of Jackson, Wyoming; Son: Mike (Jolean) Barkdull of Spring City, Utah; Stepson: Alan (Rhonda) Anderson of Rockland, Idaho; Stepson: Marty (Kimberly) Anderson of Idaho Falls, Idaho; Brother: Jay Barkdull (Josephina) of St. George, Utah; Sister: Lucille (Jim) Browning of Lebanon, New Hampshire; and Eleven grandchildren and 6 great-grandchildren.
Funeral services will be at 11:00 a.m. Monday, February 11, 2013 at the LDS Church located at 650 Pocatello Avenue, American Falls, Idaho with Bishop Dennis Cook officiating. The family will visit with friends from 10-10:45 a.m. prior to services at the church. There will also be a viewing on Sunday, February 10, 2013 from 6:00 p.m. to 7:30 p.m. at Davis – Rose Mortuary located at 170 Idaho Street, American Falls, Idaho. Burial will be in Falls View Cemetery under the direction of Davis–Rose Mortuary. The family would like to thank everyone who has provided health and support during Carl’s final years.

To order memorial trees or send flowers to the family in memory of Carl Barkdull, please visit our flower store.
Send a Sympathy Card