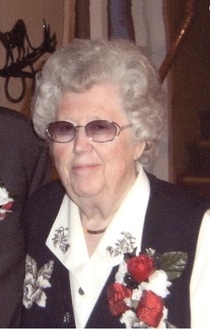 American Falls. Carma Joy Robison Larsen, 80, died on Sunday, July 12th, 2015 in Pocatello, Idaho.  She was born on 7 November 1934 in Fillmore, Utah to Pauline Swallow Robison and Alfred Milton Robison.  She graduated from Millard High School in Fillmore, then, continued her education at Steven Henagerâ€™s in Salt Lake City.  Upon graduation, she worked for the telephone company.  Friends set her up for a first date with the love of her life, John Suhrke Larsen.  They were married on 12 April 1957 in the Salt Lake Temple.  To this union were born 5 girlsâ€”Terri Lyn, Pamela, JoDean, Jill, and Jondrae.
Carma was an active member of The Church of Jesus Christ of Latter-day Saints and served in many church callings.
Lifetime friendships were created.  Friends would call and often visit for hours.  She would often go uptown with friends, get a couple of sodas, and spend time visiting in the car.
Carma collected dolls and depression era glass.
She enjoyed travelling, especially to the Ocean.  She would get up early to walk along the beach in the morning hours.
Carma was a two-time survivor of Breast Cancer.
She was a bookkeeper for Larsenâ€™s Paint & Glass.  When her passion for Plastercraft painting outgrew the basement, the Idea Shoppe was created.
When her mother was not able to live alone without ending up in the hospital, she opened her home up for extended visits.
Surviving are her husband of 58 years, John Suhrke Larsen; Daughters, Terri (Jay) Gardner, Jerome, Idaho; Pamela (Michael) Butterfield, West Jordan, Utah; JoDean (Mark) Peck, Pocatello, Idaho; Jondrae (David) Reeve, Magna, Utah; 15 grandchildren and 6 great-grandchildren.  Brother, Carold Alfred Robison, Fillmore, Utah.  Preceded in death by her Parents and daughter Jill Larsen.
Funeral services, under the direction of Davis-Rose Mortuary, with be held 11:00 AM, Monday July 20th at The Church of Jesus Christ of Latter-day Saints American Falls Stake Center, 111 Church Place, American Falls, Idaho. A viewing will precede the funeral from 9:00am to 10:30am.  Interment will be in Fillmore, Utah at the Fillmore Cemetery on Tuesday, July 21st at 10am.
Condolences and memories may be shared at www.davisrosemortuary.com

To order memorial trees or send flowers to the family in memory of Carma Joy Larsen, please visit our flower store.