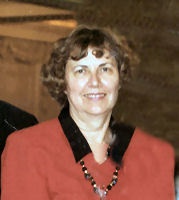 Carol Taylor Spillett passed away on April 22, 2015 at Bee Hive Homes in Perry, UT. She was born in Ogden, UT on Dec. 25 1939, being a â€œChristmas Carol!â€ She was the eldest of eight children born to Lawrence Chester and Frieda Schmidt Taylor and was raised on the Taylor Family Farm in Farr West, UT. She married James Juan Spillett in the Logan L.D.S. temple on June 9, 1961.

After graduating from Weber High School in Ogden, UT, she attended Weber State, Utah State and Idaho State Universities before graduating from Brigham Young University with a B.S. in Special Education. Following her marriage to Juan, she lived in six countries (Ecuador, India, Iran, Chad, Mexico, and Australia) and six states (Colorado, Utah, Wyoming, Maryland, Texas, and Idaho). She also travelled extensively, visiting all seven continents and more than 60 countries. Despite their many moves and travels, they maintained their home on the Spillett Family Farm in Rockland, Idaho for more than 32 years â€“ before moving to Brigham City, UT in the fall of 2014, because of health problems.

Carol was an active member of The Church of Jesus Christ of Latter-day Saints throughout her life. She held positions in the Primary, Young Womenâ€™s and Relief Society organizations and served as a missionary with her husband in the Mexico, Merida and Australia, Adelaide Missions, as well as on Stake and Ward missions. Ultimately, she served as an Ordinance Worker in the Idaho Falls, Idaho, Temple for four years.

Funeral services will be held on Saturday, April 25, 2015 at 12:00 noon at the Rockland, Idaho L.D.S. Chapel. Viewing will be at the chapel from 10:00 to 11:45 a.m. prior to services. Interment will be at the Valley View Cemetery in Rockland. Condolences and memories may be shared at www.davisrosemortuary.com

To order memorial trees or send flowers to the family in memory of Carol Taylor Spillett, please visit our flower store.
Send a Sympathy Card