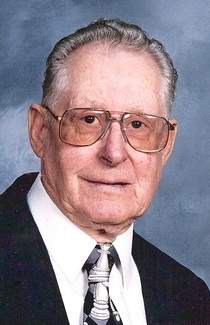 Cave James Kirtley Jr. passed away peacefully in his sleep in the early morning of August 19, 2017. He was the oldest son of Cave James Kirtley Sr., and Iva Vella McWillis. He was born in Richfield, Idaho on January 3rd, 1923.  Cave grew up, living in several places including Butte, MT, Hailey, ID and American Falls, ID.  At age 17 he enlisted in the Army, and served in WWII as a Fire Control Operator in Battery C, 630th Field Artillery Battalion.  Cave spent 5 years total in the service, which included nearly 4 years in Europe, fighting in France, Italy, North Africa and Belgium.

Cave returned home bearing the scars of war but got right to work as a farmhand on Harvey Phillips farm in Aberdeen. During this time he met and fell in love with Harveyâ€™s niece Elva, who worked as a cook on her Uncleâ€™s farm.  And on February 14, 1947, Cave James Kirtley married Elva Elmira Phillips. Together they had seven children, the first of which, RaNae Paquette was born while they lived in Aberdeen. Their remaining children, Teresa Bybee, Mary Houston, Wendell Kirtley, Tom Kirtley, Karen Guevarra, and Linda Syphus were born after the family moved to Pocatello.

After moving there, Cave worked at the Railroad for 19 years.  Cave was offered a job with the railroad, if he would move his family to Oklahoma.  Ultimately, he decided not to do that, and subsequently worked as a dairy deliveryman, a Fuller Brush salesman and a car salesman.  Cave ultimately found work at Simplot and worked there the greater part of his Career, where his mechanical inclinations were put to good use. Cave retired from Simplot in 1985.  At the time of his passing Cave had nineteen grandchildren and 41 great-grandchildren.

Cave loved horses, and he was an expert when it came to raising them, showing them, breeding them and racing them.  Some of the most memorable moments with his posterity are associated with riding, caring for, and working with horses.

With work and the challenges of life, Cave began to consider how to better direct his family life and responsibilities.  After meeting with and learning from the missionaries, Cave was baptized into the LDS Church in 1954.  He enjoyed a lifetime of blessings as a result of this. Cave and Elva were ultimately sealed together with their seven children for time and all eternity in the Idaho Falls temple on April 25, 1964.  This event, and the promises made to them because of it, brought great comfort to Cave and his sweetheart as they passed through the crucibles of trial, tragedy and heartache.

Cave was active in helping boys gain skills and confidence.  He was a little league baseball coach for about 10 years.  Cave was known for teaching the boys how to play and have fun, win or lose.  And he was sure to give every boy a chance to play regardless of their skill level. Cave enjoyed camping, fishing, boating, hunting, bowling and fixing things around the house and the barn.  Cave was also a musician and played bass in a couple of different bands. Most of all, Cave was generous, and throughout his whole life his selfless giving blessed the lives of many, not the least of which his own family.

Cave was preceded in death by his son Wendell, and his wife Elva.  The funeral services will be held at 11:00 a.m. Friday August 25th, at The Church of Jesus Christ of Latter-day Saints, 650 Pocatello Ave, American Falls. The viewing will be that same morning before the funeral, from 9:45-10:45 a.m. at the church prior to the service. Condolences and memories may be shared at www.davisrosemortuary.com.

To order memorial trees or send flowers to the family in memory of Cave James Kirtley, please visit our flower store.