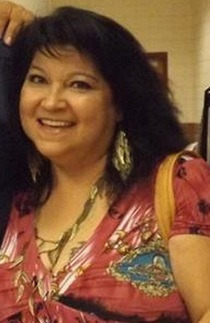 Sally was born on December 25th, 1966 in Harlingen, Texas to Mary and Jose Flores.  She was the first grandchild of Ignacio and Josefa Corpus and Santiago and Carlota Flores.
In 1968 the family moved to Idaho.  At the age of 2 Sally was blessed with her one and only brother Jose Flores Jr. Together they grew up side by side in Idaho and South Texas.  Alone they were strong but together they were unstoppable.
In 1987 Sally met and married Ernesto Escamilla in Rio Hondo, Texas.  They were blessed with two children Ernie Escamilla Jr in 1988 and Elisa Escamilla Deleon in 1990. After a 6 year marriage to Ernesto ended, Sally with Ernie and Elisa moved and joined her family in Idaho.
Sally had a great attitude and a terrific sense of humor (that she got from her father) that people found attractive and she was able to make new friends immediately. Soon after in 1995 Sally met a married John Campbell. They enjoyed many of the same things such as camping and fishing and soon found it hard to be apart. They were married and Sally had her 3rd child John Michael Campbell.  In 1999 Sally and John divorced but remained friends until the passing of John in 2014.
Everyone who knew Sally knew that she was an amazing person who enjoyed life and always tried to find the good in everything. Therefore Sally was never on the market long.
In 2000, while working as a harvest driver for a local farmer, Sally met Cameron Funk.  They had an immediate attraction and soon were married. Together they enjoyed life and made great memories taking family trips, camping or just enjoying some pizza and a movie together. Sadly in 2011 Cameron passed from health complications.
Sally loved her children but nothing compared to her pride and joys, her grandchildren. Isaiah (8), Jousalyn (7), Davian (5), Jayla (1 Â½), Audrianna (7months) and of course she couldnâ€™t wait for the birth of her 6th grandchild Athena Campbell in August.  They were her everything. She spoiled them the way any grandmother does her grandchildren. She often bought them toys they didnâ€™t need and let them get away with just about anything. They all loved her and enjoyed sleep overs or days spent with grandma or â€œMomâ€ as they called her.
When Sally was not spending time with her grandchildren, you could find her doing her 2nd most favorite thing in life, thrift store shopping. She never ran across a deal that she left behind. In her mind she would find a use for it all.  Sally was also a great cook and enjoyed baking and trying new recipes.  Her delicious food is something that will be missed by us all.
Sally passed away on April 27th at Promise Hospital in Salt Lake City surrounded by family and friends. She was survived by her mother Mary Logan (Larry); brother Jose Flores Jr. (Mimi); children Ernesto Escamilla Jr, Elisa Escamilla Deleon (Adrian), John Michael Campbell (Selena); grandchildren Isaiah, Jousalyn, Davian, Jayla, Adrianna and Athena and her  nieces, nephews, and several aunts, uncles and cousins.  It gives the family great comfort to know that she is in heaven with her husband Cameron, Father Jose â€œChemaâ€ Flores, grandparents, aunts, uncles and cousin.
Our world has been forever changed and until we meet again there will be a piece of our heats missing. We love you Sally to the moon and back. Forever in our hearts.
A memorial will be held for Sally at Davis-Rose Mortuary, 170 Idaho St in American Falls on Wednesday, May 4th at 2:00pm. A potluck will follow at the American Falls Senior Citizens center.

To order memorial trees or send flowers to the family in memory of Celia "Sally" Funk, please visit our flower store.
Send a Sympathy Card