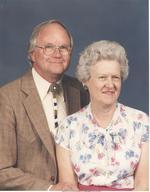 Charles J. Nielsen, 82 passed away on April 22, 2013 at Power County Hospital from complications of diabetes.  He was born April 22, 1931 in American Falls, Idaho to Charles and Lydia (Isaak) Nielsen.  He graduated from Aberdeen High School in 1949.

He attended Oklahoma Baptist University in Shawnee, Oklahoma and graduated in 1953 with a major in history and was also a member of the Bison Glee Club.  He graduated with a Master of Divinity from Southern Baptist Theological Seminary in Louisville, Kentucky in 1956.  He married Dolores Smith on August 28, 1955.

Charles began his career as a minister in Reedsport, Oregon in 1956.  He then served in several locations throughout rural Montana for 17 years.  In 1976, he moved with his wife and children to Everett, Washington and continued to work as a minister there.  In 1982, he returned to American Falls, Idaho with his wife where he spent the rest of his life.

He leaves behind his wife, Dolores (Smith) Nielsen; children, Caroline Nielsen, Angela (Nielsen) Felch, and Tim Nielsen; sister, Floraine Nielsen; three grandchildren, and many cousins, nieces, nephews, and friends.   He was preceded in death by brothers Ted Nielsen and Lee Roy Nielsen; sisters Florence (Nielsen) Anderson and Frances (Nielsen) Rowlands; and his parents Charles G. and Lydia Nielsen.  He was a loving and caring husband, father, brother, grandfather, uncle, and friend.  He will be deeply missed but we know he is rejoicing in the presence of his Savior, the Lord Jesus Christ.

The funeral service will be at 11:00 am, Saturday, April 27, 2013 at Willow Bay Baptist Church, 246 Lee St., American Falls.  The Visitation will be at 9:30 am at the church prior to the funeral.    Condolences and memories may be shared at www.davisrosemortuary.com.

To order memorial trees or send flowers to the family in memory of Charles J. Nielsen, please visit our flower store.
Send a Sympathy Card