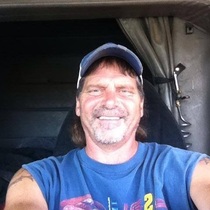 Christopher Lloyd Barnard, 55, passed away in St. George, UT, Saturday, Jan. 23, 2016, from complications from a heart attack suffered on Nov. 1, 2015.
He was born Sept. 7, 1959, to Roland L. and Janet Barnard in Pocatello. He was raised and attended school in Rockland, and graduated from Rockland High School in 1978.
He served an LDS mission in Ohio after graduating. When he returned home, he went to work at Lamb Weston as a fork lift operator. He then met Angela Christine Chivers and they were married Feb. 1, 1986. They lived in Pocatello in the house his mother Janet was raised in. They were blessed with twin boys and another son while in Pocatello, then moved to the Salt Lake City area and he drove an armoured truck for Wells Fargo and started his life as a semi-truck driver, hauling crude oil for Mert Carney and then for Steer Tank Lines. They were blessed with their daughter at this time. Later they moved back to Rockland and he drove potato semi-truck for E&R Transportation.
They moved to southern Utah and he drove a tanker truck, hauling fuel from Las Vegas back to Parawon every day. Later on he moved back home to Rockland and started driving out of SLC, hauling crude oil from Nevada to SLC. He wanted to be home more so started hauling potatoes for E&R Trucking once more until the time of his death.
Chris loved, loved NASCAR, namely #24 JEFF GORDON!! Went down to Vegas to many races and owned about everything made about JEFF! He also enjoyed following his beloved UTAH JAZZ basketball team! He loved being able to go to St. George when he could, to be with his children and grandchildren! He loved his life and his job, driving his Semi Trucks! Chris was loved and respected by everyone that knew him both on the job and at play, and he cared for everyone he was associated with!
He is survived by his parents, Janet Cammack and Roland and Sandra Barnard; his children, Andrew Craig, Allen Christopher, David Ellis, and Alexis Christine; sister, Andrea Jean Curry; step-brothers, Kirk, Paul and Todd Permann, and David Cammack; step-sisters Stephanie and Lynett. He was preceded in death by his brother Craig Ellis; step-father Grant Cammack, and his adoring grandparents.
Funeral services will be held on Saturday, Jan. 30, at 12 noon at the Rockland Ward Chapel, 375 S. Aspen St. A viewing will be held from 5 to 6:30 p.m. on Friday, Jan. 29, at the Davis-Rose Mortuary in American Falls, as well as a short viewing from 11 to 11:45 a.m. on Saturday prior to the service. Burial will follow at the Rockland Cemetery.
To order memorial trees or send flowers to the family in memory of Christopher Lloyd Barnard, please visit our flower store.
Send a Sympathy Card