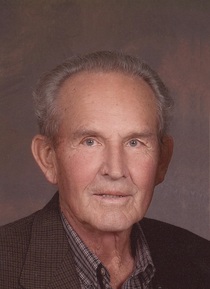 Born in Peetz, Colorado to Joe and Agnes Fehringer passed away on December 27, 2015 at Portneuf Medical Center with his family by his side.

Clarence Fehringer, the fourth oldest of the seven children of Joseph and Agnes Fehringer, was born October 13, 1928 in Peetz, Colorado. He grew up on the family farm there and received his education in the local schools and high school at St. Pats Catholic High School in Sidney, Ne. He was a sergeant in the U.S Marines Corps serving from September 1951 to September 1953. He was a telephone line specialist and served in Korea. He married Marianna Wilkins November 1955 in Sacred Heart Catholic Church in Peetz, Colorado and a few months later they made their way to Aberdeen, Idaho to start their family and farm where they have remained until recently when they moved to Pocatello.

Clarence & Marianna enjoyed their life on the farm.

He had a great love for his family.

He enjoyed following his children in all of their various activities through their school years and enjoyed doing the same with the grandchildren.
Clarence enjoyed square dancing with Marianna and liked to work in his garden and wood working in his shop.  He enjoyed spending the winters in Arizona with his wife Marianna. He was active in the Jaycees and enjoyed bowling.

A Rosary service will be held 6pm Wednesday, December 30, 2015 at the Presentation of the Lord Catholic Blessed Sacrament Chapel,667 S. 4th West in Aberdeen with a viewing at 5pm. The Funeral Mass will be held 3pm Thursday, December 31, 2015 at the church with a viewing prior to the Mass at 2pm. Interment with Military Honors will be in the Aberdeen Cemetery. Condolences and memories may be shared at www.davisrosemortuary.com

To order memorial trees or send flowers to the family in memory of Clarence Fehringer, please visit our flower store.