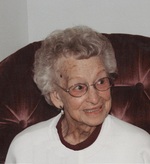 Cletis Naomi McLean, Bott, Clark  died on August 20th, 2011. She was born on March 26, 1919 to Clarence Henry Harwood and Stella Pearl Harwood in Wastuchna, Washington. She was raised at Cedarhill in Oneida County Idaho. She attended school at Cedarhill and College in Logan Utah. She married Lavell Hadley McLean on December 4, 1936. She is survived by sons Leland, Marvin and a daughter Eileen (John) Bobish.

Following the death of Lavell McLean she married Louis Bott of Rupert, Idaho and upon his death married Harland D. Clark which sadly ended in divorce.

Cletis worked as a Farmer and Rancher at Cedar Hill and Rockland, and as a Telephone Phone Operator in Rockland, she also worked in Potatoes for T.S. Vanderford in American Falls and as a Potato Inspector in Burley, Cletis was also a volunteer at the hospital in Rupert, Idaho.

She was a resident of Whispering Pines Assisted Living in Pocatello, Idaho.

The Viewing will be held at Davis-Rose Mortuary in American Falls, Idaho on Friday August 26th from 1:00 - 2pm.  Burial will follow at the Valley View Cemetery in Rockland, Idaho at 2:30 p.m.

To order memorial trees or send flowers to the family in memory of Cletis Naomi Bott, please visit our flower store.