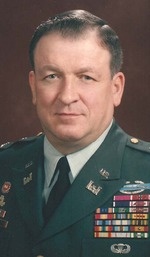 COL (Ret) Edwin Robert Ruff, decorated combat veteran, beloved husband, father and friend passed quickly of a heart attack from heaven on earth – dip netting on the Kenai River in Alaska – to being with his heavenly Father on July 19th, 2011.

Ed was a dedicated, nurturing family man and loyal friend.  All will miss his great bear hugs, his wonderful laugh, his excellent cooking, his support, encouragement and generosity.  He also had a passion for, fishing, hunting and traveling. He was very active in the Littlerock United Methodist Church and very proud of all the congregation had accomplished.   Whatever he undertook he did it with passion, integrity and a never give up attitude.

Ed was drafted into the US Army and served 29 years.  After initial basic and advanced training followed by stateside assignments to Fort Bliss, Texas, and then attended Infantry Officer Candidate School at Fort Benning, Georgia in October 1963, Ed received a 2LT commission in the regular Army as a Combat Engineer. He is one of those rare few with a field commission.  He was an Army Paratrooper as well as completing the prestigious Army Ranger training where he earned the Ranger Tab. Ed served subsequent state side assignments at Minot AFB, ND, Fort Leavenworth, KS, Fort Hood, Texas, Norton AFB, CA, Carlisle Barracks, PA and Fort Richardson, AK. Ed’s overseas assignments included Wagewan, Korea, Frankfurt, Germany, and 3 tours in the Republic of South Vietnam with the Army 1st Cavalry Division and as an advisor to the South Vietnamese Army.  While serving in Vietnam, Ed received the Bronze Star Medal, Purple Heart, Meritorious Medal, Air Medal, National Defense Service Medal, Army Service Medal, Republic of Vietnam Gallantry Cross and the US Army Combat Infantry Badge.

Ed also attended the Army’s senior level officers training courses at the Command and General Staff College, Fort Leavenworth, KS and the Army War College at Carlisle Barracks, PA.  Ed served in the ranks through Private to SGT and from Lieutenant to Colonel always in positions of greater responsibilities, trust and leadership.

Ed’s military career was full of command assignments, long deployments, challenging opportunities and rewarding accomplishments.  Ed’s service to his country was something he was most proud of. Ed retired June 1991.  He never lost his love for the soldiers he served with and the brotherhood associated with his long and distinguished service. After army retirement Ed joined Parson’s Corporation Environmental Science.

A  Celebration of Life and full military honors will take place on August 6th, 9:30 a.m. at the Mennonite Church, 381 West Washington, Aberdeen, Idaho.  Interment will be in the Aberdeen Cemetery followed by a lunch at the Fellowship Hall.  The visitation will Friday August 5th from 6 p.m. to 8 p.m. at Davis-Rose Mortuary, 170 Idaho St., American Falls, ID.

In lieu of flowers a memorial contribution may be made to the Littlerock United Methodist Church, Building Fund, P. O. Box 8, Littlerock, WA 98556

Condolences may be sent online to www.davisrosemortuary.com for the family.

To order memorial trees or send flowers to the family in memory of Col. (Ret) Edwin Robert Ruff, please visit our flower store.