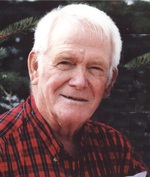 Dallen E Nelson, 82, passed away at his home on Tuesday, February 21, 2012. He was born on May 27, 1929 in Oakley, Idaho to Elvin B and Mildred G Nelson. He attended school in Kimberly, Idaho where he participated in all school activities and lettered in basketball, football, and track. Dallen was Student Body Vice President for the Kimberly graduating class of 1948 and maintained contact with his classmates including his best friend Jessie Posey throughout his life.
After graduating from high school Dallen farmed for a short period of time in the Hansen area before enlisting in the United States Air Force in 1950. He was stationed at Fairchild Air Force Base in Spokane Washington where he acquired the rank of Staff Sergeant and worked as a jet engine mechanic on a B-52 Bomber named “The Tender Trap”. It was during this time that he met the love of his life, Lillian Carol Lee at the Gold and Green Ball in Spokane. They were married on February 6, 1953 and later solemnized their marriage in the Idaho Falls temple on August 14, 1953.
Upon completing his tour in the military, Dallen and Carol made their home in Seattle where he worked as a jet engine systems mechanic for the Boeing Company. The couple moved to Aberdeen, Idaho in 1960 so Dallen could return to farming and raise their family in a smaller community. He was employed by Duane Poulson Farms beginning in 1961 until he retired.
Dallen was a faithful member of the Church of Jesus Christ of Latter-day Saints and served in several capacities.
He is survived by his wife Carol; his children, Jim (Janiel),Rexburg; Dave (Barb), Pocatello; Gary (Jean), Aberdeen; Debbie (Mark) Meldrum, Columbus, Ohio; Shelley (Boyd) Simonson, Aberdeen; Tracy Reed, Aberdeen; Tim (Sherri), Aberdeen; Tina, Blackfoot; and Stephanie Beach, Aberdeen; brothers Val, Las Vegas; Norman, Boise; and sister Karen Slaugh, Twin Falls; 26 grandchildren and 27 great-grandchildren. Dallen was preceded in death by his parents, his daughter Patricia, his granddaughter Tosha, and son in law Chris Reed.
Funeral services will be held at 11 a.m. on Saturday, February 25, 2012 at the Aberdeen LDS Chapel. A viewing will be held from 6 to 8 p.m. on Friday, February 24, 2012 at Davis-Rose Mortuary, 170 Idaho, American Falls, and from 10 to 10:45 a.m. prior to services at the church. Burial will follow at the Aberdeen Cemetery. Condolences and memories may be shared at www.davisrosemortuary.com.

To order memorial trees or send flowers to the family in memory of Dallen E Nelson, please visit our flower store.
Send a Sympathy Card