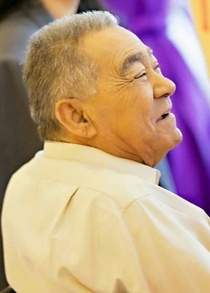 Daniel A. Flores, 68, of American Falls, Idaho passed from this life to the next March 15, 2016.  was born on July 18, 1947 in Rio Hondo, Texas to Santiago Flores Sr. and Carlota Flores. From the beginning, Dan and his eight siblings had a very close bond. It didn't matter how far apart they lived from each other they always kept close.
In 1969, Dan met the love of his life, Socorro. They married in 1971 and moved to American Falls, Idaho shortly after. They had three children, Belinda, Glenda, and Danny. Dan's children were his life.
In 1982, Dan started working for Kay Hunt Farms in Lake Channel where he did what he loves most for 27 years. When Dan wasn't farming, he enjoyed spending time with his family. He enjoyed fishing, dancing, singing with his siblings, and listening to music. His favorite team was the Dallas Cowboys. If he was watching his team play, it was the only time he didn't want people bothering him.  Most people remember Dan's contagious smile. He always welcomed family and friends with a cheerful smile and a big hug.
Dan is proceeded in death by his parents, two brothers, and fathers-in-law. He is survived by his wife Socorro Flores, children Belinda Flores (Ishmael Alcaraz), Glenda Flores (Tony Castorena), Daniel Flores Jr. (Agnes Hammer), 6 grandchildren, 3 great grandchildren, 4 sisters, 3 brothers, and many nieces and nephews.  The viewing will be held at 10:00 A.M. Saturday, March 19, 2016 at St. Maryâ€™s Chapel, in American Falls, Idaho. The Mass of Resurrection will start at 11:00 A.M.

To order memorial trees or send flowers to the family in memory of Daniel A. Flores, please visit our flower store.