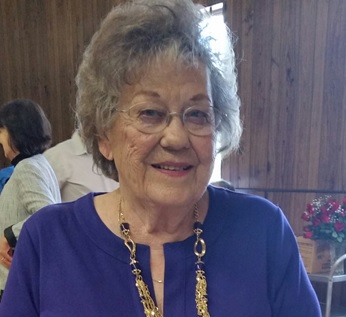 Della Ethel Alston 94 years old joined her husband and the Lord in heaven on Thursday, December 19, 2019 in Pocatello, Idaho.

Ethel was born to John W. Brumfield and Bertie Mae Stacey Brumfield on July 26, 1925 in Protem, Taney County Missouri.  She took the position of her mothers helper very seriously being the second of seven siblings.

Ethel was 11 years old when her family moved to American Falls.  She attended Fairview School and excelled in spelling and was active in 4H.

In July 1941 Ethel met a young man who she would go through lives adventures with.  On October 19,1941 Ethel married Edwin B. Alston in her parents’ home in American Falls, Id.

Together they had four children, Judy, Richard, Shari and Tim.

In 1956 Ethel found herself living in Salt Lake City Ut as Ed’s job was located there.  Ethel’s career in banking began in Utah in 1962, she enjoyed working with the public.  She helped open two new banks in the Salt Lake area before returning to Idaho in 1975.

Ethel and Ed returned to American Falls and bought a farm in 1975. Ethel worked for several banks in Idaho before ending her 30 year banking career in 1995.  Ethel didn’t stay retired long, she loved being busy and worked for Simplot in Aberdeen for a short time and for Spring Creek Manor as kitchen supervisor before she retired for good.

Ethel and Ed traveled to Arizona in the winters until age slowed them down.  They sold their beloved farm and spent a year and a half living in Mesa, Arizona until Ed’s passing in August 2018.  Ethel returned to Idaho and lived with her daughter in Pocatello until September 2019 when she moved to Quail Ridge Assisted Living where she enjoyed visiting with the staff and residents.

She was preceded in death by her husband, her parents, her siblings Vernon, George, Al, Bob, Betty Friesen, Marguerite Armstrong and Dale.

We want to express Thanks to the staff and Physical

Ethel will be remembered for her compassion, how she loved tending to her flower gardens, her joy of cooking and all the family gatherings she so loved.

In honor of her wishes cremation has taken place and a memorial service is being planned for April 4,2020 in American Falls.

A graveside service for Ethel Alston will be held at 1:00 p.m. Tuesday, October 19, 2021 at the Falls View Cemetery.   Edwin and Ethel will be buried together on this day, which would be their 80th wedding anniversary. Covid precautions are recommended.

Click to download / open
To order memorial trees or send flowers to the family in memory of Della Alston, please visit our flower store.
Send a Sympathy Card