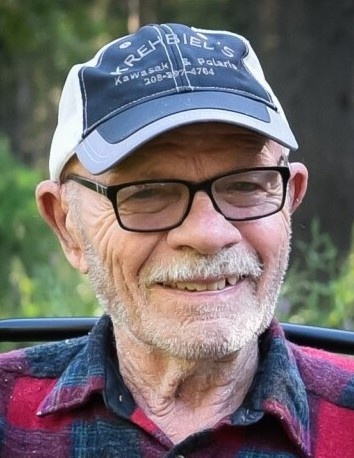 Our precious papa, grandpa, and honey-babe passed away peacefully on September 26, 2021.

Dad lived a life of adventure and of his own making. His strength, determination, and love of his family allowed all of us to come along for the ride.

Dad was born in St. James, Minnesota and his family moved to American Falls in 1945. Apparently, dad was born with gold fever. He built his first sluice box at 12 years old, and the love of gold mining carried on throughout his life.

Dad got his pilot’s license at 16 and bought his own airplane, the Ballanca, when he was 23.

Dad met our beautiful mama while attending Boise Junior College. He completed his college education at Fresno State as a mechanical engineer. He worked at North American Aviation for 7 years in Los Angeles and helped design the landing gear of the X-15.

In 1963 FMC was hiring engineers so they moved back to American Falls. In 1966 dad and mom joined the Sage Riders Motorcycle Club and thus began years of motocross and cross-country racing. Long days in the desert waiting for our knight in shining armor to ride in.

Dad retired after 30 years at FMC and from then on it was full on gold mining. He proceeded to obtain and work many mining claims along the Snake River. He eventually had a large backhoe, dump truck, and huge sluice that he designed himself. Mining became his full-time hobby and job.

Then at the ripe age of 70 he bought a Harley Sportster and there began a new journey.

Dad’s passion for speed and dirt is in our blood and forever will be a part of all of us.

It was a grand adventure, and we were privileged to be a part of it.

He was preceded in death by his father Arthur Linscheid, his mother Thelma Cary, and sister Diane McMillan.

A Graveside service will be held on Saturday October 2, 2021, beginning at 10:00 a.m. at Falls View Cemetery in American Falls.  Visit DavisRoseMortuary.com to share memories and condolences.

To send flowers to the family or plant a tree in memory of Denver, please visit our floral store.

Click to download / open
To order memorial trees or send flowers to the family in memory of Denver Linscheid, please visit our flower store.