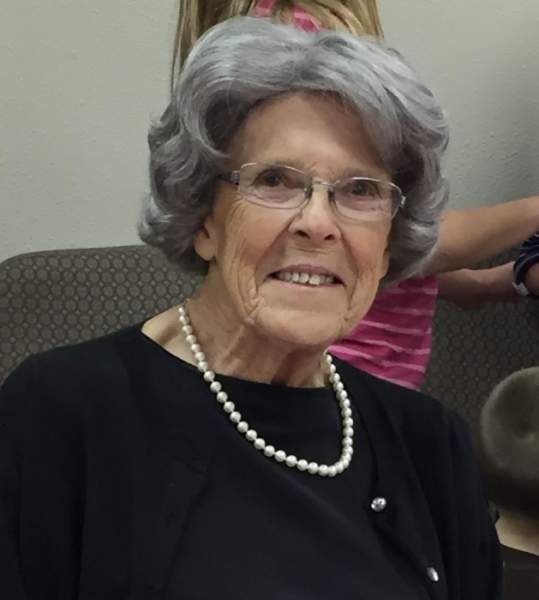 Edith Lucille Klassen Brown went Home peacefully to be with her Lord and Savior on January 8, 2019 in her home in Aberdeen, Idaho.   Edie was born February 7, 1927 to Cornelius and Paula Klassen in Aberdeen, Idaho, the second youngest in a family of ten children. She grew up on the farm, playing with her closest brother, Ralph, loving horses, and learning to be happy with their simple life. She attended school in Aberdeen and after her high school graduation worked at the local bank.   Later she began corresponding with a young man, Timothy Brown, from southern California, and on August 12, 1947, they were married and took up residence in Sierra Madre, California where Tim was working.  Shortly before the birth of their first son, they returned to her former home in Aberdeen and were blessed with five more children.  Through the years, Edie was a busy mom and was given the opportunity to love and participate in the lives of numerous grandchildren, great grandchildren, and in recent years even a few great-great grandchildren.   After having celebrated 70 years of marriage together, her husband, Tim, passed away October 8, 2017.

Edie is survived by her brother, Ralph Klassen, her children; Dave, (husband of the late Lynn Brown); Dan, his wife Sheryl; Chic O'Brien (husband of deceased daughter Susie); Neil, his wife Beth; Jim, his wife Charlene; and Karen, her husband Ted Sester; 24 grandchildren, 47 great grandchildren, and 5 great-great grandchildren.  She was preceded in death by her parents, Cornelius and Paula Klassen, her siblings, Erna (Giesbrecht), Arthur, Olga (Dear), Cherry (Thonney) Irvin, Martha (Bell), Kurt, and Otto. She was also preceded in death by a son, Kurt (stillborn), a daughter, Susie (49), and five great grandchildren, Jeffrey O'Brien (18), Joshua and Maria McDonald (stillborn), Zeke Jarawan (4 months), and Sierra Buchanan (at birth).
Edie loved and was loved by each one of her family individually and was lovingly known as "mom", "grandma", and "GG" by each of the respective generations, including each of those who entered the family by marriage.

Because of her relationship with the Lord Jesus Christ and receiving His work on the cross to save her from her sins at an early age, she left a legacy that will live on in the lives of her family and many who knew her. Her warm smile and her patient suffering up to the end was a demonstration of what only the grace of God had worked out in her life.

To order memorial trees or send flowers to the family in memory of Edith Brown, please visit our flower store.