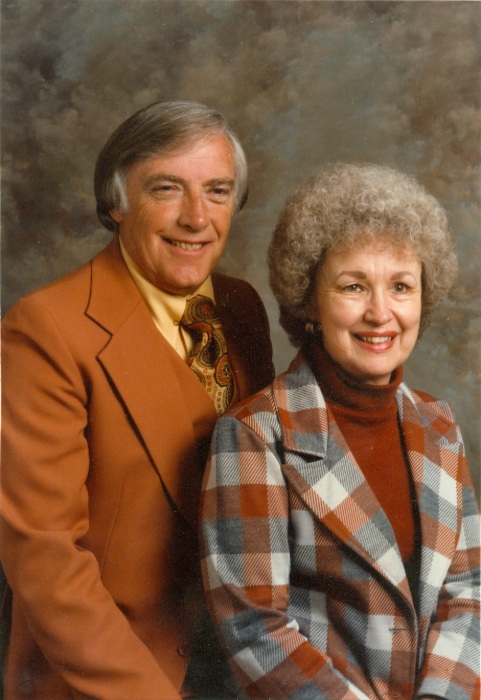 Edna Luceil (Honey) Rytting Hansen was born on October 5, 1926, in her grandparent’s home in Rexburg, Idaho to Joseph and Edna Rytting. She earned her nickname, Honey from the family to distinguish her from her mother. Much of her childhood was spent in Rexburg where she remembers picking raspberries and taking them to the train station to be shipped to stores in Pocatello. She learned to swim in the canal by her grandparent’s house.

Her family moved to Inkom where her father taught school and Honey skipped two grades. The family later moved to St. Anthony where Honey graduated from St. Anthony High School in 1942 at the age of 16. Honey then went to Pocatello to attend the University of Idaho Southern Branch, now Idaho State University. While in Pocatello, she lived with her aunt and uncle, Bob and Elva Purrington.

After graduating in Pocatello, Honey went to Oregon State University. She participated in the sorority system at Oregon State and graduated with a degree in Business Administration.

After graduation from Oregon State, Honey returned to Pocatello where she went to work for First Security Bank. Her Uncle Bob was the manager of Safeway in Pocatello and on weekends she worked for him at the grocery store. It was there she met Kay Hansen.

Kay and Honey were married in Pocatello in the backyard of Keith and Elaine Riley in 1946. Kay was transferred with the Safeway Corporation to Idaho Falls and their first child was born in 1949. Kay was later transferred to the Safeway store in Rigby.

Honey’s Uncle Bob decided to open an independent grocery store in Rexburg with Honey’s father as the accountant. Kay was hired at the grocery manager. Honey also worked in the store until her second child, Kathryn Jo, was born in 1954, followed by Kerry Dale in 1955.

In 1957, Kay took a job with Kraft Foods and the family relocated to Pocatello. Honey went to work for Idaho Bank and Trust. In the early 1960’s Kay went to work for First Security Bank. Neither bank saw a conflict in the spouses working at competing banks.

In 1966 Kay was transferred to Rexburg with First Security. It took until spring of 1967 for their new house to be ready with Honey holding down the fort during the week and Kay commuting back and forth on the weekends. Once settled in Rexburg, Honey went to work as office administration for Madison Memorial Hospital.

In 1970, Kay transferred once again with First Security to America Falls. With a house under construction, the wait for the family to move was much less than previously. Honey first worked for Dr. Marrow in American Falls, later beginning her career with Idaho Power.

In 1976, Honey was once again running the house while Kay was commuting to Salmon to help out at the First Security Branch.

In 1977, Kay was transferred to the division office of First Security in Pocatello and Honey transferred with Idaho Power as administrative assistant to the division manager. This was the last move for Honey and Kay. They moved into their home in Chubbuck in December 1977.

Honey has been very active in the Soroptimist Club of Pocatello. Honey retired from Idaho Power. Honey loves her mystery novels and the television show NCIS. Honey and Kay attended ISU football and basketball games and were members of the Bengal Foundation. Honey is a Golden Bengal.

Honey and Kay took cruises to Mexico and the Caribbean as well as traveling to Hawaii. Their favorite trips were to England, where they visited with friends they had met on their cruises. They also traveled to Norway.

Kay passed away in April 2010.  Honey stayed in their lovely house on Elizabeth. It remained the hub of family get togethers until Honey’s health required a move to assisted living. It was at Edgewood Spring Creek, in American Falls, under the expert care of Joyce and her kind staff, that Honey sang her last song. Honey passed on November 25, 2017.

The family wishes to give special thanks to Edgewood Spring Creek, Dr. Seibold, Access Hospice, Davis-Rose Mortuary and all who stopped to have a chat with Mom.

A celebration of life for Honey and rededication of the grave for Kay will be held on June 30, 2018 starting at 1:00pm at Falls View Cemetery in American Falls. An informal gathering will take place at Kathy Wright’s home at 524 Bennett, following the service.

To order memorial trees or send flowers to the family in memory of Edna "Honey" Lucille Hansen, please visit our flower store.
Send a Sympathy Card