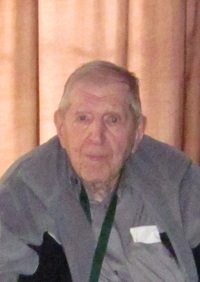 ROCKLAND – Edwin Conrad Beitz of Rockland, Idaho, passed away on Tuesday, June 25, 2013, at his home in Rockland, Idaho.  Edwin was born April 24, 1922, in Loveland, Colorado, to Ralph and Louise Schafer Beitz.  He was raised and went to school in American Falls, Idaho.

Ed served in the US Army Air Forces from March 1941 until July 1945.  He served during the Korean War in the US Air Force from October 1950 until October 1951.  After the Korean War Ed worked as a civilian for the Air Force at Hill Air Force Base, as an aircraft inspector, engineering technician, equipment specialist and Supervisory Equipment Specialist/Branch Chief.  After retiring from Hill Air Force Base, Ed completed the Farmers Insurance Career Course and worked as a Farmers Insurance Agent in American Falls, Idaho.

On June 9, 1946, Edwin married Florence Eva Perry of Rockland, Idaho, at her home in Rockland.  This marriage was later solemnized in the Salt Lake City Temple.  They have lived in Washington and California and then settled down in the Ogden/Roy, Utah area for 21 years.  In September, 1973, they moved back to Rockland, Idaho.

Edwin joined the Church of Jesus Christ of Latter Day Saints in April, 1953.  He served in the Bishopric, Stake High Council and as a Counselor in the Stake Presidency.  He served with many great men and women.

The visitation will be from 10 to 10:40 a.m. Saturday, June 29, 2013, at the Church of Jesus Christ of Latter-day Saints Rockland Ward, 405 E. Shoshone, Rockland, Idaho.  The funeral service will start at 11 a.m.  Interment will follow at the Valley View Cemetery, in Rockland, Idaho.

He was loved by family and friends, we will miss him greatly.

Our family would like to thank the staff of Alliance Home Health and Hospice; the people of Rockland who supported dad during his attempts of living at home; and the Steidley family for all you have done and continue to do for us.

To order memorial trees or send flowers to the family in memory of Edwin Conrad Beitz, please visit our flower store.
Send a Sympathy Card