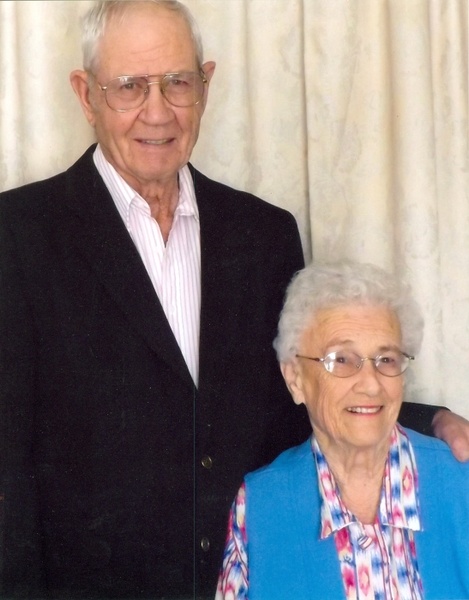 Elaine Marie Permann Miller passed away on May 20, 2021 peacefully in her sleep surrounded by her family. Elaine was born on July 26, 1928 to Albert and Mary Kurtz Permann.  She attended school at a small country school between Little Creek and Rockland.  Later, she attended school in American Falls where she graduated.

Elaine was the oldest of four children, Leona Huber (deceased), Ramona Wetzel, and Larry Permann (decease).  Elaine was always busy helping her Mother with the cooking, cleaning, and the gardening.  She also had to help in the fields, hauling hay, pulling rye, and helping clear new broken ground of sage brush.  Elaine delighted in teasing her younger sister, Ramona.

Elaine married Vernon Miller on November 9, 1947.  They farmed in Sterling, Idaho where they started their family.  They had seven boys, Ricky, Ronnie, Steven, Randy, Bart, Craig, and Kirby.  Vernon and Elaine later moved to Rockland when they bought the farm from Vernon's dad and farmed for many years.  They later bought Little Creek farm from the Permann Family.

Elaine is survived by her husband, Vernon, her sons Randy (Janet) Miller, Bart (Terri) Miller, Craig (Tressa), and Kirby (Charlene) Miller, her daughter-in-law, Janie Miller, her sister, Ramona Wetzel and numerous grandchildren and great grandchildren.  She is preceded in death by her sons, Ricky, Ronnie and Steven, her parents, Albert and Mary Permann, her sister, Leona Huber, and brother, Larry Permann.

To order memorial trees or send flowers to the family in memory of Elaine Miller, please visit our flower store.