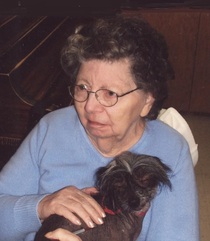 Betty Ferrin, 86, went to be with her Lord and Savior Jesus Christ on Tuesday, March 11th 2014, in American Falls, Idaho.

She was born on August 19, 1927, the only daughter of Ole and Ruth Kolden, in Aberdeen, South Dakota. Betty met her husband Carrol H. Ferrin in South Dakota, and later followed him to Seattle, Washington, and was married there on January 11th, 1957.

Betty, at heart, was a wife and mother first, and a friend to everyone else. She took joy in taking care of her family, and would at times go without something so that her kids would have what they needed.

Her strong faith in Jesus was a testimony to her family and friends, and she was always ready to send prayers up to heaven at a moment’s notice. Her favorite hobby was decorating wedding cakes. This became profitable enough to supplement the family income, and be a safety net in the lean times. Betty loved to talk to anyone about the many cakes she decorated over the years.

She is survived by her brother Robert Kolden, South Houston, Texas and her Sister-in-law Helen Kolden, Aberdeen, South Dakota.

She was preceded in death by her husband Carrol Ferrin, her parents Ole and Ruth Kolden, her brother Harlan Kolden, her sister in law Kathlryn Kolden and also her nephew Michael Allan Kolden.

To order memorial trees or send flowers to the family in memory of Elizabeth Louise Ferrin, please visit our flower store.