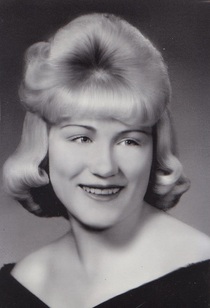 Elizabeth JoAnn Gibbs (Nelson) passed away December 6, 2015 while at Safe Haven. JoAnn was born on January 28, 1946 in Louisville, Kentucky to Paul and Ezra Gibbs and Geneva Caroline Gibbs. When JoAnn was three the family moved to Aberdeen, ID.

JoAnn did not have much of a childhood as she Genevaâ€™s right hand. She learned very early to care for her siblings. After she got over the measles she saw to the need of the others, including her mother, who had come down with  them. JoAnn earned money by babysitting and ironing for the women in Aberdeen and seemed to have a knack for saving for an emergency. Even while hoeing beets she could outdo everyone. JoAnn was a good cook as she learned from one of the best. She scored a perfect score with her biscuits in Home Economics.  Even while at Safe Haven she would quote a recipe for someone as she never seemed to forget how to cook.  She could bake any cake from scratch. She loved to sew and made many of her own clothes. She loved everyone and gave much.

JoAnn wanted to be a school teacher. While in school she would finish early and help grade the other papers. She taught her siblings their ABSâ€™s and arithmetic.

JoAnn graduated from Aberdeen High School on May 27, 1965. Upon graduation she went to work at Lamb Weston and got her own apartment. She worked there off and on until 1981. On August 1st, 1982 she married the love of her life, Earl Edwards in Idaho Falls.

Funeral services were held Wednesday, December 9, 2015 at 11 am at Davis-Rose Mortuary, 170 Idaho St. in American Falls. A viewing was held prior to services at 10 am and Interment followed services in the Neeley Cemetery. Condolences and memories may be shared at www.davisrosemortuary.com

To order memorial trees or send flowers to the family in memory of Elizabeth JoAnn Gibbs Nelson, please visit our flower store.
Send a Sympathy Card