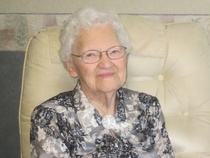 Elva Enns Funk, of Loveland, CO, died on August 2, 2016 in her home which she shared with her caretaker, Joanne Ruah. Elva was born in Aberdeen, ID, May 23, 1919 to Abram and Marie Enns. Her school years were all in the Aberdeen system where she had perfect attendance during most of her 12 years. Elva worked after school and on Saturday in her fatherâ€™s grocery store. Elva and Ronald were thinking of getting married, but Elva felt she couldnâ€™t be away from helping her Dad in the store. After a small fire, which meant the store had to close for a few days, her mother quickly made a wedding dress and Elva and Ronald were married on April 2, 1939 at First Mennonite Church. They were both life-long members at First Mennonite and Elva served as the secretary at one time. Her husband of 71 years, her parents, and a sister, Emma (Stella) Wiebe preceded her in death. She is survived by a son, Ronald Kent (Sherry) Funk of Aberdeen , a daughter, Connie (Robert) Shelley of Fort Collins, CO and four grandchildren, Erik (Ana) Hunsinger of Wheat Ridge, CO, Dr. Tanya (Charles) Bay of Fort Collins, CO, Kerrie (Jeff) Garner of Pocatello and John Paul (Kirsten) Culligan of Pocatello.
To order memorial trees or send flowers to the family in memory of Elva Ella Funk, please visit our flower store.