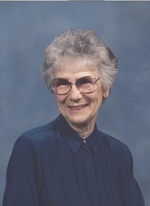 Emma L. Clyne 97 passed away Tuesday, July 10, 2012. She was born July 12, 1914 to Gustav and Emma Comnick Wegner at Southwick, Idaho. She attended school there until 1928 when the family moved to Rockland, Id. She graduated from American Falls High School in 1931 and then attended Lewiston Normal Teachers College. In March 1933 she married Leonard Ringe at Clarkston WA. He died in 1966. In 1968 she married Raymond Clyne and lived in Nampa until he died in 1976. Emma lived in Nampa and Twin Falls until 2002 and then returned to American Falls. She was a lifelong member of the Lutheran Church.

Memorials may be made in memory of Emma to the St. John’s Lutheran Church Memorial Fund.

To order memorial trees or send flowers to the family in memory of Emma Clyne, please visit our flower store.
Send a Sympathy Card