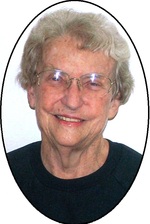 She was born Feb. 28, 1927 to Lawrence and Irene Harris in Ogden, UT, and was reared on the small family farm in Pleasant View, UT. She was the eldest of six siblings, including Earl (Betty) Harris, Wayne (Shirley) Harris, Edith (Ron) Finch, Laura (Wayne) Wilde and Lola (Vern) Child, all of Utah.

Erma graduated from Weber High School, Ogden, then from Weber Junior College, and went on to Utah State University, Logan, UT, where she graduated in 1949. It was at Utah State where she met Robert Phyl Crompton. Erma and Bob were married June 1, 1949 in the Logan LDS Temple. He preceded her in death on July 27, 1980.

To that union were born five children, including: Kim (Kathleen) Crompton of Spokane, WA; Brett (Debbie) Crompton, American Falls; Becky Crompton, Pocatello; Kelly (Lynette) Crompton of Pocatello; and Elizabeth (Ed) Fehringer of Hayden, ID. Lori Dawson has also been a part of the family for many years.

Erma and Bob lived in Utah for the early years of their marriage, with a brief stint in southern California, where Bob worked for various newspapers and magazines, while Erma taught at the elementary and junior high school levels and worked as a medical receptionist.

They moved to American Falls in November of 1959 after purchasing The Power County Press, and then later The Aberdeen Times.

They worked together at the newspapers for many years, but Erma also took time away from the newspaper business to work as a community education director, then multi-occupations teacher, amongst other titles for the American Falls School District.

Very active in The Church of Jesus Christ of Latter-day Saints, she served in a number of capacities over the years, including several years as chorister and music director.

She played music by ear, but was especially proud of a song she composed and wrote the lyrics for which appeared in the December 1968 issue of The Children’s Friend.

Erma remained active with The Power County Press and The Aberdeen Times for most of her life until a stroke slowed her down a bit in the late 1990s. She was a resident of Spring Creek Assisted Living for the past several years and enjoyed playing music and singing for the residents there for much of that time.

She is survived by all of her brothers and sisters, as well as brother-in-law, Dale (Dixie) Crompton of Oregon, and sisters-in-law Pat Priest and Shirley Morrow, both of Utah. She is also survived by all of her children; along with eight grandchildren, Nic, Mike and Brianna Crompton, Fallon, Whitney and Jacob Fehringer, and Robert and Preston Crompton; two step-grandchildren, Lonnie (Sherrie) Stradley and Stacie (Steve) Ellis and five great-grandchildren, Steven and Sara Stradley, Skyler Stradley, Lily Ellis and Eva Crompton.

Donations, in lieu of flowers, would be preferred to the American Falls Friends of the Library, the Idaho State Civic Symphony or the charity of choice. Memories and condolences may be shared at www.davisrosemort.com.

To order memorial trees or send flowers to the family in memory of Erma Crompton, please visit our flower store.