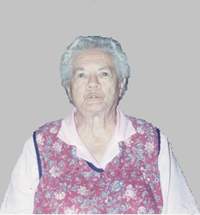 Almost 99 years earlier, she was born November 08, 1914 in a small community of Sublett, in Cassia County Idaho.

Erma was the first born of Raymond and Sarah Haskell, over the next twenty four years, eight more joined the family. In 1929, the Haskell family moved from Sublett to a farm known as “The Cully Place” at the head of Spring Creek in Rockland Valley. The children attended the lower grades at a country school in East Fork and went to high school in Rockland. One of Erma’s main chores in the family was to do the gardening, and from that she developed a great love for growing things.

She married Lloyd Moss in Rockland Idaho, on October 13, 1936. They were members of the Church of Jesus Christ of Latter Day Saints. Lloyd and Erma had their marriage solemnized in the Salt Lake Temple in 1947.

In the fall of 1937, Lloyd and Erma leased a ranch in the Gros Ventre area of Teton County, Wyoming, where they lived until the ranch was sold. They moved around the valley a lot until 1950 when they bought a home about a mile west of Jackson city limits. The home site has long since been covered up by “progress” in the area now known as South Highway 89 where a boat and RV service is located.

While in Jackson, Erma worked at several motels and as a clerk at “The Trading Post”.

Four of their five children were born in Teton County and, sadly, two of those children also passed there.

After living nearly 50 years in Jackson and Teton County, Wyoming, Lloyd and Erma returned to Southern Idaho where they had both been raised. They bought a home in American Falls, Idaho, and there Erma enjoyed working in her yard and raising beautiful flowers. She also did very nice needlework.

Erma was preceded in death by her Husband Lloyd, her infant daughter Norma, her son Clay, grandson Kerry Clayburn and granddaughter Cherrell Moss. Also preceding her in death were her parents, her sisters Lucille Porath and Ada Wangsgard, her brothers Daniel Haskell, Alvin Haskell and Ivan Haskell.

Erma was a vital member of our large family. She was a great example of strength, determination, ingenuity and self reliance. We will miss her.

To order memorial trees or send flowers to the family in memory of Erma R. Moss, please visit our flower store.