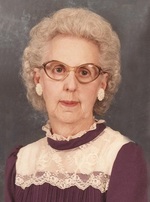 Erma E. Perry Steidley of Rockland, Idaho, beloved Mother, Grandmother, Neighbor and friend departed this Earthly Life on July 3, 2012 following a lingering illness.  Erma was born June 6, 1914 at home in Rockland, Idaho to George Elmer Perry and Florence Ida Perry, the second in a family of five children.  She was reared and educated in Rockland, graduating from Rockland High School as Salutatorian of her class.  Following graduation she moved to Twin Falls, Idaho and graduated from Twin Falls Business College, then was employed at the Irrigated Lands Insurance Company and later as Book keeper at F.W. Woolworth’s.

On November 2, 1941 she married John Junior Steidley of Novelty, Missouri.  This marriage was later solemnized in the Idaho Falls L.D.S. Temple.

Returning to Rockland in 1942, she and her husband engaged in farming and Erma became Correspondent for Time News of Pocatello and later the same position for the Power County Press.  Erma served as Postal Clerk at the Rockland Post Office for over 40 years, serving under two Postmasters, Esmerelda C. Taylor and Wilburn J. Adams.

Erma was a faithful and lifelong member of The Church of Jesus Christ of Latter-day Saints, serving diligently in numerous callings- Teacher in the Sunday school, Primary, Relief Society and was a visiting teacher.  She loved secretarial work and served in the name extraction program for over ten years.

Her enjoyments were her family, keeping a neat and tidy home, Needle Point Work and travelling with her husband for winters in Yuma, Arizona and St. George, Utah where they did Temple Work.  She loved to dance and read.  She was a very caring and thoughtful person who always remembered birthdays and special family events.  After the death of her husband she continued to be an anchor for her family which grew to include 27 great grandchildren which included 10 girls and 17 boys all of whom were the light of her life.

The visitation will be from 10-10:40 a.m. Monday July 9, 2012 at the Church of Jesus Christ of Latter-day Saints Rockland Ward, 405 E. Shoshone. The funeral service will start at 11:00 a.m. Interment will follow at the Valley View Cemetery, in Rockland, Idaho.

“God has you in His arms,

We have you in our hearts.”

To order memorial trees or send flowers to the family in memory of Erma E. Steidley, please visit our flower store.
Send a Sympathy Card