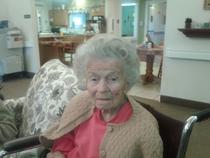 She was born November 8, 1912 on a homestead in Perkins County near Faith, South Dakota to Richard and Malvina Krueger Mehlhoff. She was reared and educated in the Midwest. She married Miles Stanley Ziebach May 24, 1937 in Custer, South Dakota. The couple moved to Pocatello, Idaho in 1939. In 1949 they moved to a small farm in Aberdeen, Idaho where they raised cows, chickens, dogs, cats, and horses. She loved being outside and had a great garden. She made wonderful donuts and saw to it that we had plenty to take with us when we went camping. She was a stay at home Mom and just worked in potato harvest in the fall. She did lots of sewing over the years and knitted sweaters and afghans.

She worked at Western Farmer Association in Aberdeen from 1967 to 1972. They moved to American Falls in 1981. After retirement they traveled many years to Yuma, Arizona to spend the winters.

She was preceeded in death by her parents, her husband Miles, brother Ernest Mehloff and sister Elsie Clyne.

A viewing for family and friends will be held Friday, March 27, 2015 at 1:00 at Davis-Rose Mortuary. A graveside service will follow the viewing at 2:15 at Falls View Cemetery. Condolences and memories may be shared at www.davisrosemortuary.com.

To order memorial trees or send flowers to the family in memory of Esther Mehloff Ziebach, please visit our flower store.
Send a Sympathy Card