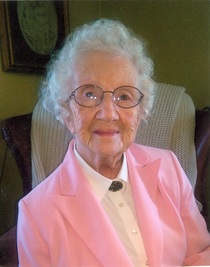 Eunice Buchanan Klassenâ€”absent from the body, present with the Lordâ€”passed away peacefully on July 1, 2016 in American Falls, Idaho.

Eunice was born on March 8, 1920 in St. Francisville, Illinois, the daughter of Ralph and Gertrude Buchanan. She was the sixth of nine children, and grew up with her siblings on the family farm. While at a young age, she came to know the Lord Jesus Christ as her personal Savior. Psalm 103, which she memorized as a child, was a lifelong encouragement to her.

On June 2, 1941, Eunice married Otto Klassen, and they began their life together in Aberdeen, Idaho. She dedicated herself to her husband and their eight children, and self-sacrificially lavished time, attention, and care on each one of them. Her children never once remember hearing her complain. Later in life, her children, grandchildren, and great-grandchildren spent many happy evenings with her on Sundays, when they regularly gathered in her home.

Eunice was â€œfull of good worksâ€ (Acts 9:36) and well-known for being â€œgiven to hospitalityâ€ (Romans 12:13). Friends far and near knew they were always welcome in her home, and she and her husband often kept guests for extended periods of time. She loved serving people and making others happy.

Together with her husbandâ€”and until her deathâ€”Eunice was part of an assembly of Christians gathered in Aberdeen. Even in her old age, Eunice lived out her faith by sharing Sunday school literature with her friends at Spring Creek Manor in American Falls.

In her final days, Eunice found great comfort in Psalm 34:4 which reads: â€œI sought the Lord, and He heard me, and delivered me from all my fears.â€

Euniceâ€™s family would like to extend their thanks to her Hospice care providersâ€”Dr. Mills, Jen, Patty, and Sandyâ€”along with the staff and caregivers at Spring Creek Manor, in recognition of their exceptional kindness and care.

A visitation will be held from 5:00-7:00 PM Monday July 4, 2016 at Davis-Rose Mortuary, 170 Idaho St., American Falls. An additional visitation will be held at 10:00 AM Tuesday July 5, 2016 at the Aberdeen Middle School, Aberdeen. The funeral will follow at 11:00 AM. Entombment will be at Homestead Cemetery in Aberdeen. Condolences, memories, and photos may be shared at www.davisrosemortuary.com.

To order memorial trees or send flowers to the family in memory of Eunice Buchanan Klassen, please visit our flower store.
Send a Sympathy Card