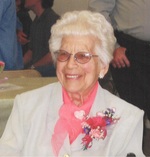 Evelyn Ruth Schneider Roper passed from this life on October 22, 2011 in American Falls, Idaho after struggling with illness at the age of 94.

She was born March 28, 1917 in Chikio, Minnesota the 3rd child of Eva Elizabeth Broadbooks and William F. Schneider. Early in her life they moved to Becker, Minnesota.

In November 1927 the family moved to a dry farm in Blaine County, Idaho. This was a shock for the 10-year-old girl. She rode her old mare 4 miles to the country school in Blaine County through the eighth grade. She started high school in Rupert, transferring later to Pocatello where she graduated in 1938. Evelyn moved to Salt Lake City, where she attended night school, studying business skills. During all this time she worked for several families in order to get her education.

In 1939 while visiting her sister, Carolyn Munn in Arbon Valley, she met her future husband, Allen Roper and his daughter Jackie. A recent widower, Al was living in the Rockland Valley.

In March 1940, the little family moved into the Walt Thompson homestead on lower Rock Creek. Evelyn had lived in the same house until a few weeks ago. There they raised six more children Patricia, Robert, William, Bonnie, Lance, and Janelle.

The early years were busy with taking care of children, feeding farm hands, and doing chores. During some of the bad winters (48-49), the family would move to American Falls for the winter in order to get the children to school. The family was the first in the Rockland Valley to grow row crops of potatoes and beets with the newest innovative water system, the gated pipe. Evelyn got to learn about cutting seed potatoes, and riding the “spud” digger. Evelyn and family helped with feeding the cows in the winter, branding, and taking them to the reservation for summer pasture.

Grandchildren were added to the crew. Many of the grandchildren have stayed with Grandma for extended periods of time. Evelyn also worked part time in the Power County Treasurer’s office. During the June and December tax collection times she was a regular fixture in the courthouse for four different Treasurers; Pearl Calloway, Lucille Porath, Melba Fergusen, and Julie Zacharias. She didn’t give it up until she was eighty years old.

After Al’s death in 1976, Evelyn found she had to baby-sit the cows. She would make sure the ice was broke in the creek, and it was not too slick for them to water.

Evelyn was a member of the United Methodist Church. She served as the UMW president, and President of the local AARP chapter.

Services will be held at 11:00 a.m., Wednesday, October 26, 2011at the American Falls Community 745  Bennett Ave in American Falls. The viewings from 6 to 7:30 pm, Tuesday, Oct. 25th at Davis-Rose Mortuary, and one hour before service on Wednesday at the church. Condolences and memories may be shared at www.davisrosemortuary.com.

To order memorial trees or send flowers to the family in memory of Evelyn Ruth Roper, please visit our flower store.
Send a Sympathy Card