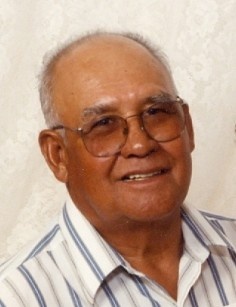 Felipe was born July 10, 1928 in Karnes City, Texas to Severo and Antonia Pena.  His family consisted of three brothers; Lee, Severo, Jesse, and four sisters; Adela, Lionedas, Lupe, and Martha. Who are all deceased.

Dad came to Aberdeen in 1939 when he was 11 years old with his younger sister, Martha.  They were sent to Aberdeen with the Mercado and Lopez families.  His brothers Lee and Jesse were already living in Aberdeen.

As a young boy dad did not have a lot of education because the family worked as laborers and traveled frequently as far as Michigan.

On October 17, 1948, he married Estella Cardona.  They made their home in Aberdeen and raised three Children: Carol, Esther, and John.

Dad worked as a farm laborer, working in the potato warehouses, for Harold Funk, and J.R. Simplot in the trucking department until his retirement.  He was a fast learner and knew a lot about the potato industry.

When the grandkids were younger, they would take them camping and boating to Twin Lakes.  He loved to garden and every summer had a big beautiful garden which he shared with everyone.  Felipe enjoyed being around people and welcomed everyone into his home.  He had a lot of friends and enjoyed visiting and telling stories.  He loved his family, and grandkids and enjoyed spending time with them.

Felipe is preceded in death by his wife, Estella, daughter, Esther Johns, and grandsons, Michael Ron Flores and Phillip Pena.

He is survived by his daughter, Carol A. Flores (Ronald) and son John.

The Rosary will be at 6:00pm, Friday April 30, 2021 with a viewing following until 8:00 pm at Blessed Sacrament Catholic Church. 667 S. 4th W., Aberdeen, Idaho.  The Mass of the Resurrection will be at 10:00 am Saturday, May 1, 2021 at the Church.  Interment will be at the Aberdeen Cemetery.  Condolences may be shared at www.davisrosemortuary.com.  Due to Covid-19, Masks will by required.

We would like to give a special thanks to Portneuf Cardiac Unit, Gateway Transitional Center, and Encompass Health.

To order memorial trees or send flowers to the family in memory of Felipe F. (Phil) Pena, please visit our flower store.