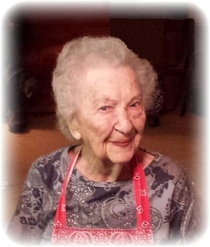 Fern, the daughter of Lee and Nola VanHorn, was born October 10, 1915 in Malad, Idaho.  Her family farmed wheat in Arbon Valley and Fern, the first of three siblings, enjoyed her childhood years assisting the family with the farming and everyday experiences of farm life.  She lived with her grandmother in Malad from the age of six until her teenage years while she attended school.  At the age of 15, she met George England and they were married November 19, 1934 in Pocatello.  The England family also farmed wheat in Arbon Valley north of the VanHorns.  Fern and George lived in the England homestead and continued farming.  Their first son, Lynn Edward, was born November 16, 1939, and their second son, Jeffrey Lee, was born December 17, 1949.  Both sons grew up helping the family with the farming until Fern and George retired in 1974 and moved to American Falls.  Fern was known for her cooking and making it stretch for whoever would show up while harvesting,  visiting, or just stopping by while traveling down the road.  She always had an open door for everyone.  Fern was an excellent seamstress and was constantly sought by all family members to mend or sew an outfit in a minute or two.

During the years of farming, Fern served on the Harms Memorial Hospital Board for over 20 years and enjoyed traveling to various parts of the country including Hawaii and the Caribbean.  One of her fondest times was the camping at Yankee Fork of the Salmon River every year and the weekly picnics with all of the family friends in Knox Canyon and Green Canyon.  Another enjoyment of hers was playing bridge twice a month with her close friends.  She was loved by all and never met a stranger.

She was preceded in death by her parents, Lee and Nola VanHorn, her brothers, Boyd and Hubert VanHorn, her husband George England, and her daughter-in-law, Donna England.

To order memorial trees or send flowers to the family in memory of Fern Lenore England, please visit our flower store.