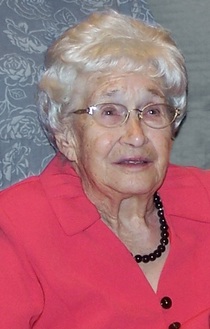 Fern Leone Tyler Udy, our loving mother, passed away Monday, December 23, 2013, in American Falls, Idaho. She was born October 9, 1920, in Rockland, Idaho, the daughter of Marvin and Emma Hunter Tyler. She married Grant M. Udy on April 3, 1937, and the marriage was later solemnized in the Ogden Temple on November 26, 1988.

She and Dad lived and farmed in Rockland until 1996 and then moved to American Falls. Mom enjoyed reading, crochet­ing and being outdoors. She was an excellent cook and put many meals on the table for family, friends and strangers. She was a faithful visit­ing teacher and dedi­cated Primary secretary for many years. She also enjoyed attending her grandchildrens’ sporting events.

Her three sisters - Emily, Elsie and Vera; and her six brothers - Clint, Raymond, Harold, Clarence, Verl and Dale preceded her in death. She is survived by seven children: Eva Beth Spil­lett (Ted), Pocatello, Idaho; Richard Udy (Lin­da), serving a mission in West Virginia; Marva Jean Knudsen, Bountiful, Utah; Dalene Widerburg (Larry), Woods Cross, Utah; Merrill George Udy (Shirley), American Falls, Idaho; Roland Udy (Vicky), Sacramento, California; Blaine Udy (Debbie), American Falls, Idaho. She is also survived by 26 grandchil­dren and 51 great-grand­children (two on the way) and 12 great-great grand­children. Dad preceded her in death on Novem­ber 29, 1998. One great grandson, Austin Jen­sen, also preceded her in death. Viewing will be Sunday, December 29, 6:00 p.m. – 7:00 p.m. at Davis-Rose Mortuary in American Falls, Idaho. There will be a viewing at the church prior to Monday’s service. It goes from 11:00 am - 11:45 am.

Funeral services will be held Monday, Decem­ber 30, 2013, 12:00 p.m. at the Rockland Ward LDS Church, Rockland, Idaho. Interment will be in the Rockland, Idaho Cemetery. Condolences and memories may be shared at www.davis­rosemortuary.com. In leiu of flowers, donations can be made to a charity of your choice.

To order memorial trees or send flowers to the family in memory of Fern Leone Udy, please visit our flower store.