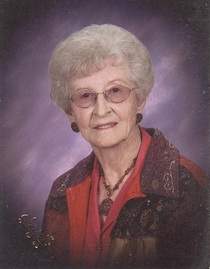 Frances Burge Lattin died on August 27, 2014. Frances was born on October 30, 1917 to Rose Marie (Neil) Phelps and Frank W. Phelps in Dayton, Washington. The oldest of 5 children, she spent her childhood in Arbon Valley where she attended school and high school in American Falls. She married Clifford LeRoy Burge on November 28, 1936 and lived in a sheep camper for the first winter of marriage. They raised their three children Bernie Allen Burge (deceased), Roberta Schritter (Melvin) and Richard Frank Burge (Barbara) all of American Falls.
She received  a LPN certificate in 1965 and worked at Harms Memorial for 2 years. Her husband Cliff was killed in a hoist accident February 18, 1966. She then moved to Mesa, Az. to work at Good Samaritan Hospital, where she met and married Dan Lattin on October 15, 1971. They spent summers on his farm in Belt, Montana and winters in Mesa. They later divorced. She continued to live in Mesa during the winters and the American Falls and Rexburg areas during the summers for a few more years until moving to American Falls in 1996. She loved to travel and cruised to the Caribbean, Alaska, Hawaii, and travelled in Europe. She helped out at the Senior Center, made many quilts that went to Bosnia, enjoyed doing various crafts and working in her yard and flowers.
She is survived by two sisters Thyra Greaterex of Pocatello and Elaine (Ed) Kucera of Hamilton, Montana; daughter, Roberta; son, Richard; six grandchildren; seven great grandchildren; and two great-great grandchildren. Preceding her in death were her parents; one sister, Annabel; one brother, Jesse â€œBudâ€; one son, Bernie Allen; and one grandson, Rodney.
A gathering celebrating her life will be held Wednesday, September 3, 2014 at Davis-Rose Mortuary, 170 Idaho St. in American Falls at 10:00 am with a committal following at 11:00 am at the Falls View Cemetery in American Falls.

To order memorial trees or send flowers to the family in memory of Frances Lattin, please visit our flower store.