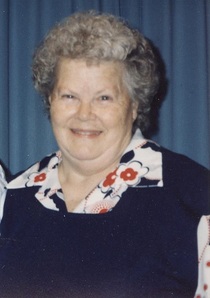 Francis Anna Hiatt Clouser passed away at home at 12:01 AM June 25, 2017 from congestive heart failure.

Francis was born on December 17, 1924 to Joseph Walter and Ada Velate (Hendricks) Hiatt in Nampa, Idaho. Francis was the youngest girl of eight children. Francis had three older and one younger brother and two older sisters. She grew up in Springville, Utah on a small acreage of fruit trees. Francis attended school in Springville and after her junior year in High School she joined the Navy in 1944. She met and married Melvin Arthur Clouser in Tillamook, Oregon while she was in the Navy.

Francis was a cook for many years. In high school she worked in a burger cafe then Cook & Bakerâ€™s in the Navy. She was always cooking in some cafÃ©. After we moved to American Falls she worked at the Starlight CafÃ©, Lakeview Truck Stop, Melody Lanes and Rogerâ€™s CafÃ©.

While working at Rogerâ€™s CafÃ© she slipped on the wet floor and broke her ankle.

She loved to square dance with Dad which they did for many years.

After she retired she sold Artex Fabric Paints for many years. She really enjoyed doing this. She loved country music.

Mother was a life-long member of the Church of Jesus Christ of Latter-day Saints.

The visitation will be held 10:00 AM Saturday, July 1, 2017 . The funeral services will follow at 11:00 AM at The Church of Jesus Christ of Latter-day Saints 3rd and 4th ward building, 356 Pocatello Ave in  American Falls, under the direction of the American Falls 2nd Ward. Military Honors and interment will follow the service at Falls View Cemetery in American Falls.

Francisâ€™ family would like to thank caregivers from Encompass Home Health and Hospice for the loving care she was given over the last years. A special thanks to Nora, Amanda and Gloria. The love and care given was above and beyond. She loved you dearly.

To order memorial trees or send flowers to the family in memory of Francis A. Clouser, please visit our flower store.
Send a Sympathy Card