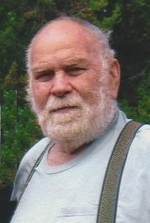 Gail William Lasley, after battling cancer, passed away early Friday, October 14, 2011 at home with family surrounding him. Gail was born on June 24, 1932 in Rockland, Idaho.  He graduated from Rockland High School in 1950 and then played football for the University of Utah.  Gail served in the Army during the Korean War and served an LDS mission in the Western Canadian Mission.  Gail married Marilyn Pearl Allen on April 10, 1959 in the Idaho Falls Temple.  They were blessed with six children: 3 boys and 3 girls.  Michael (Jan and Dennis Hill), Sara Burrell, Bill (Kristi), Becky (Rob) Farnsworth, Allan (Billie Jo), Donna (Greg) Wilson.  In Gail’s lifetime he worked many jobs, some of which are: Power County Highway Department, State of Idaho Highway Department and employed by the Church of Jesus Christ of Latter-day Saints.  He retired in June 1994 and relocated to Island Park.  He and Marilyn served a mission together in the Family History Center in Salt Lake City, Utah.  Gail continued to enjoy life working with his hands.  His pride and joy was his wife, children and grandchildren.  He was a loving husband, father and friend and he will be greatly missed.  He was preceded in death by his parents Charlie and Jessie Lasley and son Michael Gail Lasley.

Family asks, in lieu of flowers, donations will be appreciated and accepted at Key Bank of Idaho in American Falls, to help with medical and funeral expenses.

To order memorial trees or send flowers to the family in memory of Gail William Lasley, please visit our flower store.