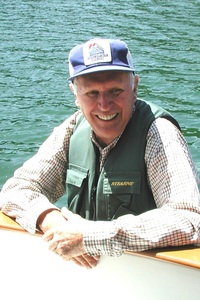 Galen M. McMaster passed away peacefully August 9, 2013 in Tacoma, WA. He was surrounded by Sigrid, his wife of 59 years, and family, including his four children, Roger, Vern, Dwight and Charlotte.

Born June 24, 1928 in Twin Falls, ID to Willard and Charlotte McMaster, Galen was raised on the family farm in Hansen and graduated from Twin Falls High School. In 1950, he graduated from the University of Idaho with a bachelor’s degree in agricultural engineering.

Galen was proud to have served in the United States Army from 1950 to 1952 as a combat engineer.

In 1954, while working on the Columbia River Drainage Project in Ephrata, WA, he met Sigrid Brunsch on a blind date.  They were married in a double wedding celebration just four months later and were partners for life.

Galen joined the staff of the University of Idaho College of Agriculture in 1955 as an agricultural engineer specializing in crop irrigation. He received his master’s degree in 1964.

Until 1965, Galen and his family lived in Aberdeen, ID, where he worked at the U of I Research and Extension Center (“the station”). Family and community activities were important to Galen, and he enjoyed his time as a Little League coach, Scoutmaster, and President of the Aberdeen Jaycees.

An avid outdoorsman, Galen loved hunting, fishing, snowmobiling, camping and boating. He was never happier than when he was on the water with a fishing pole in his hand or in the mountains with a rifle over his shoulder. After many years of fishing and hunting with friends and family members, Galen knew many of the streams, lakes, canyons and mountaintops in Southeastern Idaho, as though it were his own backyard.

Although a fervent Idahoan, Galen enjoyed many memories of camping and salmon fishing with friends and family in Newport, on the Oregon Coast. He and Sigrid also spent several summers floating their boat along the inside passage of Southeast Alaska and “gunkholing” in the Puget Sound and San Juan Islands of Washington.  He was always pleased to play a hand of cards and liked to watch a good ballgame.

A memorial service will be held at 10AM on August 23rd at the Community Church, 845 Bennett Avenue in American Falls.  The family requests casual dress and no flowers please.  Any memorial donations may be given to the charity of your choice.  The family will have a private interment at a later date.  Sigrid’s contact information is 7290 Rosemount Circle, Apt #104, Tacoma, WA 98465, 208-226-2716.   Condolences and memories may be shared at www.davisrosemortuary.com.

To order memorial trees or send flowers to the family in memory of Galen M. McMaster, please visit our flower store.