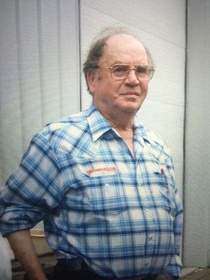 Gary Lindhartsen passed away peacefully on Saturday April 2nd shortly after noon, while at home with his daughter Elizabeth. Gary would have been 76 on May 5th.

Shortly after Garyâ€™s birth in American Falls, ID in May of 1940, the second son of Mary and Ogden Lindhartsen, the Lindhartsen Family returned to their home in Nebraska where they stayed until Gary was 5 years old.  They then returned to Southeastern Idaho, settling in Aberdeen where Gary would call home the majority of his life.
Gary attended school in Aberdeen from kindergarten through high school, graduating from Aberdeen High in 1957.  Gary was always working, starting early moving pipe and helping on the family farm.

In 1961 he married Cheryl Vollmer.  They operated a dairy farm with his father for 3 years in Aberdeen.  During those years they had 2 daughters, Teresa and Elizabeth.  In 1969 they moved to Warden, WA where Gary worked for Western Farmers.  While living in Warden they welcomed their 3rd daughter, Michelle.  In 1972 the family moved to Richland, WA where Gary served as the Production Manager and oversaw the successful construction of the Lamb Weston plant in Richland.  Gary & Cheryl divorced in 1975 and Gary returned to Aberdeen.

When Gary returned to Aberdeen he went to work for his step-father Wilson Nowles.  This was the beginning of his career as an electrician.  Gary apprenticed under Wilson for 2 years before taking over the business, Valley Electric.  Gary served as the â€œElectrician to the Farmersâ€.  You could always find him going above and beyond to make sure that the local farmers always had electricity to tend to their fields.
Beginning in the late 70â€™s Gary began making yearly trips to Alaska.  These trips began as 2 week ventures to catch as many fish as possible.  He made many friends in the Last Frontier state, but the fish in the Kenai, Kasilof or Anchor Rivers were not included.  Over the years, his trips went from 2 weeks to nearly 4 months.  Gary loved Alaska and shared that love with his daughters and grandchildren.  They were all treated to trips to Alaska to spend time fishing with Grandpa.

Always an avid outdoorsman, hunting and fishing were the highlight of Garyâ€™s life.  He shared these times with his daughters, family, and friends.  His family and friends were so fortunate to have elk, deer, goose, salmon, halibut, clams, and pheasant to put on their tables.

Services will be May 13th, 4 pm, at Blessed Sacrament Catholic Church, 635 S. 4th W, Aberdeen, ID 83210.
Memories, condolences and photos may be shared at www.davisrosemortuary.com

To order memorial trees or send flowers to the family in memory of Gary Lee Lindhartsen, please visit our flower store.